10 Apr 17 Why the King of Margarine wants out 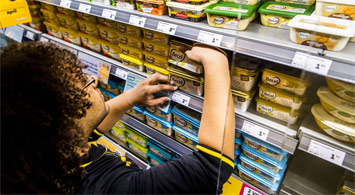 Unilever, formed in 1930 by the merger of a Dutch margarine maker (Margarine Unie) and a British soapmaker (Lever Brothers), is ditching the margarine.

From CEO Paul Polman’s statement last week: “After a long history in Unilever, we have decided that the future of the Spreads business now lies outside the Group.”

That “spreads” business includes the two leading margarine brands in the US, Country Crock and I Can’t Believe It’s Not Butter. Among Unilever’s other margarine brands around the world are Becel, Blue Band, Dorina, Flora, Pyschka and Rama.

The company is basically Margarine Central. But margarine isn’t where the action is anymore.

“Sales in spreads declined,” Unilever acknowledged in its 2016 annual report, “as modest growth in emerging markets was offset by the continued but slowing decline in developed markets.”

This decline is partly due to the comeback of butter, as the previous medical consensus that it was a health risk and margarine was not crumbled in the face of new evidence. Butter’s resurgence probably also has something to do with rising affluence and food snobbery.

In any case, after outselling butter in the US from 1958 through 2004, margarine is back in second place.

Unilever, after years of throwing shade at butter (“Butter kills,” Polman said in 2010), actually began adding the stuff to some of its margarines in 2013 to make them taste better. From Matthew Boyle’s January 2014 Bloomberg story on the shift:

“Margarine has become a marker for cheap, processed, artificial, unhealthy food,” says Marion Nestle, a nutrition professor at New York University. “The irony is hilarious. Unilever went to a lot of trouble to formulate healthy margarines, but the zeitgeist has caught up with them.”

Adding a little butter to the company’s margarine wasn’t going to change that perception: If people want butter, they want butter.

More important, though, is that it’s not just the return of butter that did margarine in. This is quite clear if you look at consumption data from Margarine Unie’s home market, the Netherlands:

In the Netherlands, butter hasn’t really made a comeback (although, once you convert those kilograms to pounds, it’s apparent that the Dutch eat more of it than Americans do ), but margarine consumption has nonetheless collapsed.

Also apparent is that the Dutch ate insane amounts of margarine — more than 40 pounds per person per year! — in the 1950s and 1960s.

It’s testimony, I guess, to the power of having the world’s leading maker of a product in your backyard. Maybe the Dutch felt like they had to eat the stuff out of patriotic duty. Even now (or at least as of 2009, when the above data series ends ), they eat a lot more margarine and what they call “halvarine” (light margarine with about half the fat of regular) than butter.

The country’s national breakfast consists of bread smeared with margarine (or butter, but usually margarine) and covered with chocolate, fruit or anise sprinkles. Still, dietary habits can change…..