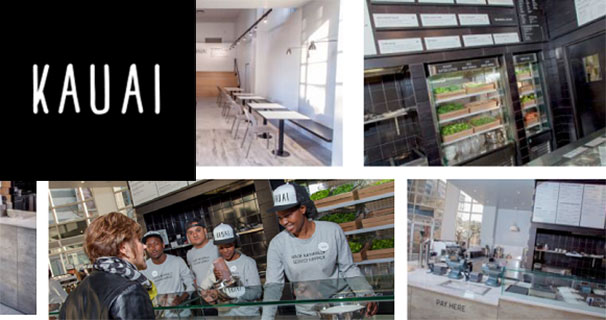 The leading multi-brand food group has entered into a joint venture for Thailand and a master franchise for Asia with Dusit Thani (a company listed on the Thailand Stock Exchange), and also a master franchise with Vineyard Catering in the Netherlands.

The Thai JV will be called Dusit Real Foods, and will oversee the opening of several fast-casual restaurants in Thailand, with possible expansion into retail ranges. Dusit Real Foods already has four stores lined up through its long-standing relationship with Virgin Active health clubs, with the first store to open at the end of September.

The first Dutch Kauai store will open in Utrecht in August 2019.

Dusit International is a publicly listed Thai multinational hospitality company headquartered in Bangkok, Thailand. The group has diverse interests in the hospitality, food and beverage space, including 29 hotels and resorts in 18 countries, an investment in NR Instant Produce, a leading manufacturer and exporter of instant food and beverages for more than 50 brands, and a majority equity stake in Epicure Catering, the leading provider of catering services to international schools in Thailand.

The new stores will carry the brand name Real Foods, while still retaining the Kauai concept, store design and menu. Much of the menu will remain the same, with roughly 30% changing to meet local tastes, adding several Thai-inspired dishes like soba noodle salads, iced tea and coffee drinks.

The first Dusit Real Foods store will be opening inside the Virgin Active health club in Whizdom 101, a landmark new mixed-use development in Bangkok.

The JV aims to build value in the high-growth food sector by combining Dusit’s expertise in the hospitality, food and beverages space (including access to top-tier hospitality and restaurant talent from its hospitality education programme) with Kauai’s proven 23 years of experience in health and operating quick service restaurants (QSRs).

Over time, there is also potential to tap into Dusit’s considerable strength in food manufacturing and Kauai’s product innovation skills to create a range of healthy retail products.

According to Real Foods Group CEO Dean Kowarski, “Vineyard Catering approached Real Foods with the belief that the Kauai brand would resonate with and attract the Dutch consumer.

“We view this opportunity as a platform for further expansion into Europe, with partner Vineyard Catering, which has a strong track record in food and catering.”

The first Kauai store in the Netherlands will be located in Utrecht Centraal railway station. It is the largest and busiest railway station in the country, with sixteen platform tracks, more than 1 000 departures and almost 200 000 passengers per day.

Kauai and Vineyard Catering were awarded this sought-after site after a competitive tender process, which affirms the global appeal of the Kauai brand, and the growth of healthy eating.

“Naturally, this type of location is a great fit for the Kauai offering, which has grown into a premium brand in the highly competitive fast casual food market,” notes Kowarski.

“Kauai has become synonymous with natural food, and its emphasis on nutrition and responsible sourcing has a strong appeal for a European market that is embracing healthier living.”

He adds that 70% of the menu will remain the same for the Netherlands offering. The rest of the menu will be tweaked to serve the needs and tastes of the Dutch consumer, like adding more on-the-go items and using local Dutch ingredients, like boerenkaas.

“Globally, there is a major shift taking place as consumers seek out healthier, natural food options which also feature both affordability and convenience,” says Kowarski.

“Our new partnerships in Thailand and the Netherlands reflect this shift, and also demonstrate that Real Foods is achieving its mission of bringing more health and wellness options to consumers worldwide.”