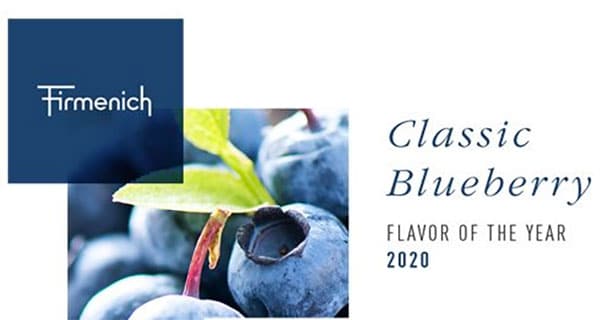 The world’s biggest flavour company, Firmenich, has hailed “Classic Blueberry” as its flavour of the year for 2020 – citing the fruit’s longstanding association with wellbeing and its role in ushering a new wave of F&B options for global consumers.

This marks the eighth consecutive year that the Swiss flavour house has cast its vote for the hottest flavour of the forthcoming year.

“What’s classic is new again,” says Emmanuel Butstraen, president of Firmenich. “With blueberry, we celebrate a flavour that is timeless and enduring, but also increasingly relevant.”

The announcement from Firmenich comes as the color blue is in the spotlight. Last week, Pantone listed Classic Blue as its colour of the year for 2020 in line with a rising industry trend for vibrant blue hues and cerulean tints in F&B applications.

Meanwhile, GNT Group highlighted that “Shades of Aqua” will be a key colour trend for 2020. Vivid blue and green hues in food are set to drive innovation as consumers seek products that “reconnect them with nature,” the company noted.

According to Butstraen, blueberry has been a “beloved flavour for centuries in many markets and today, is being rediscovered and growing to be one of the most relevant flavours in many categories,” he explains.

“Blueberry is a fantastic flavour to work with because it is robust and multi-faceted,” Jeffrey Schmoyer, VP Global Sensory & Consumer Insights at Firmenich, told FoodIngredientsFirst.

“It is renowned for its standout floral notes and distinct tanginess, while also bringing fresh green and sweet elements to the overall profile. It even includes subtle hints of citrus, vanilla and spice notes giving it a complexity that will accentuate and pair with many flavours,” he continued.

“Beyond the classic pairings with other berries, there are many less obvious matches, such as black tea or habanero, that can be explored.”

While blueberries are no doubt highly photogenic and shareable, for us, it is much deeper than that, Schmoyer noted. “Blue is a very rare colour in the plant world. When nature creates this colour and does so in such a way, it signals something special is inside.

“We believe consumers understand that blueberries and their berry cousins are special and unique on an intuitive level. This is only compounded by the positive emotions they deliver, at a time when consumers crave optimism.” Jeffrey Schmoyer, VP Global Sensory & Consumer Insights at Firmenich

Consumer interest in blueberries overall has surged in part due to a strong connection to wellbeing. In a recent Firmenich social media study of online discussions around “superfoods,” berries were the number one food mentioned and blueberry was the number one berry.

“As consumers are being introduced to an expanded offering of choices, more traditional flavours like blueberry are being used to help them experience these new food trends,” explains Mikel Cirkus, Global Creative Director Foresight & Trenz for Firmenich.

“This choice of a more traditional flavour as our ‘flavour of the year’ actually represents a more significant shift in the food industry toward more intentional and emotional design,” notes Schmoyer.

“Consumers are more inclined to try something unfamiliar to them, such as kombucha or a cashew yogurt if it’s flavoured in a way they can connect with on an emotional level. We see blueberry playing a bigger role in the coming years in helping product developers introduce new food concepts around the world,” he adds.

Dairy, baked goods and snack products are the most frequent in terms of product categories that use blueberry as a flavour. Blueberry also plays a notable role in many confections, gums and desserts, Schmoyer explains.

However, in terms of growth rates, there is an emerging story in snacks, especially healthy snacks and infant food.” There is also a significant acceleration in growth for beverage applications, particularly within specialty drinks, energy drinks and flavoured alcoholic drinks,” he adds….