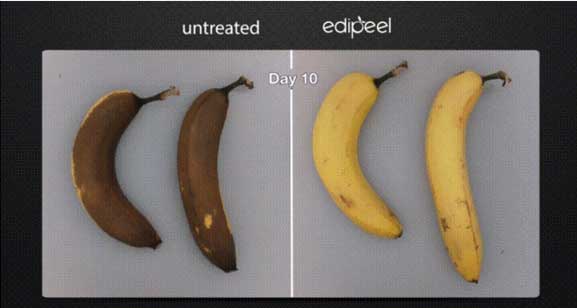 Back in 2014, we reported on Apeel Sciences, on the brink of commercialising bioengineered films for fruit, fresh produce and flowers to dramatically and naturally extend shelf life. Here’s an update on this remarkable technology…

APEEL SCIENCES is rolling out Edipeel, a product for fresh food growers and retailers made entirely from extracts that are found in all fruits and vegetables, that provides a protective layer for fresh produce.

This completely natural method makes it possible for growers and distributors to reduce their use of chemical preservatives, reduce reliance on refrigeration, and reduce the amount of harvested produce lost to spoilage.

Apeel’s products are now approved and available for USDA certified-organic and traditional produce, and the company is preparing to roll out the product with select citrus and avocado partners globally.

Apeel has moved into a new 10,000m2 facility in Goleta, Santa Barbara, that will enable the company to work on different varieties of produce and fresh food partners. 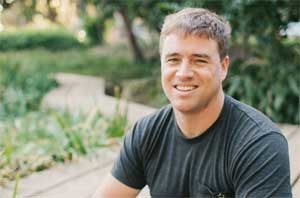 Food Tank had the opportunity to talk with James Rogers, CEO of Apeel (left), about the problems associated with perishability, their product Edipeel, and future prospects for the company and its products.

Food Tank (FT): Edipeel is made from plant oils. Where do you source your plant matter from and what do you do with the leftover material after the oils have been extracted?

James Rogers (JR): The beauty of what we do is that we can get our materials from any plant source, any fruit or vegetable. We currently use grape pressings from wineries, effluent from soup processing facilities, and materials that are left over from other forms of processing. These companies mainly use the juices and the pulp and leaves the seeds, stems, and skins.

Once we get it, all the plant oils that we need are right there—but the oil materials that we want are locked up. What you would normally do with that stuff is throw it into a compost heap, and over time, heat, pressure, and bacteria would break that stuff down into the building blocks, which would get recycled back into nature. We want to get access to that stuff—so we accelerate the composting process.

Then our job is to separate and purify those individual components that are required in our product— which are different types of oils. There are other important materials in there, and other opportunities for products in those materials, but currently we just put those back into the ground as green waste.

FT: Your company is helping to confront the issue of food waste by preserving produce longer. What other issues do you see with our food system and how do you think they can be addressed?

JR: All fresh produce is seasonal and perishable, which means you are either in season and you have huge supply and surplus of this food, or you’re out of season, and you have no supply and an absence of produce.

The challenge with trading food is that food is a perishable asset, which means it has a certain shelf life. The irony here is that the value of the produce that you are producing is linearly related to the distance that you are able to transport it.

For example, three smallholder mango producers farmers in Kenya, if each has 1,000 mangos—we can’t trade each other mangos. The value of the mango comes in giving it to someone that doesn’t have mangos. Because the produce is grown regionally, to generate value from that piece of produce, you need to be able to transport it far enough away that people don’t have access to that product in the place where you are selling it.

You look at the thing that is contributing to the produces’ perishability—which is water loss and oxidation. So, we have developed a method of using food to preserve food, which translates into slowing down water loss from the produce, while slowing down oxidation. As a result, we are mitigating the factors that cause the produce to spoil, hence reducing perishability. This ultimately improves the transportability of the produce, which opens up new avenues for trade.

Spray this invisible, edible coating on produce and it could last five times longer

A Santa Barbara, California-based startup called Apeel Sciences has invented an edible coating called Edipeel that it says can extend a fruit or vegetable’s shelf life by as much as five times….

Food preservation is as old as mankind. One of the latest techniques reaching commercialisation in the US involves bioengineered films for fruit, fresh produce and flowers. Scientists at startup Apeel Sciences have figured out a secret to doubling their lifespans. And they do it naturally….