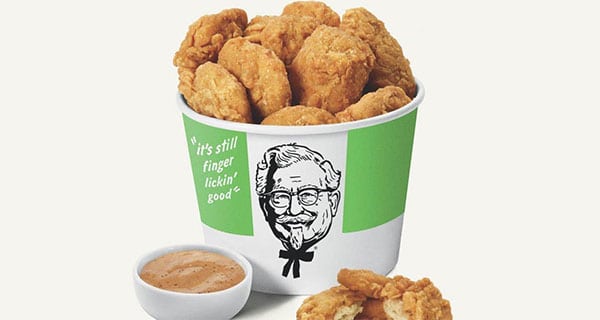 This past Monday, KFC debuted its plant-based chicken–Beyond Fried Chicken–at a single Atlanta restaurant. The public response was ridiculous, to say the least.

The product, which was developed in partnership with Beyond Meat, is being served as nuggets and boneless wings, as part of a test to determine if they should expand distribution as part of a broader initiative.

In June, KFC launched a vegan chicken burger in the UK, which sold out in just four days.

With the new item, KFC joins other fast-food chains such as Burger King in offering meat-free menu items through plant-based protein alternatives.

Judging by these successes with plant-based menu items, many market analyts predicted the Beyond Meat fried chicken would be a hit – and so it was!

Customers had already started lining up before the first employees arrived at 8am (the restaurant opens at 10:30 am), with a queue that stretched a few blocks, despite the rain.

By the time it opened, the line of cars waiting at the drive-through was double-looped around the building and spilling as-far-as-the-eyes-could-see down the highway, causing traffic jams.

At 12:45 pm, there are about 200 people were waiting in line, despite staff having told them that they were about to sell out, and plenty of people balking at the line length and leaving.

Here’s the compelling scene from customers in Atlanta on launch day: