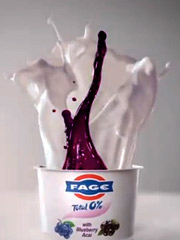 Fueled by rising demand for Greek varieties, yoghurt finished 2010 as one of the fastest-growing grocery categories in the US, according to new figures from SymphonyIRI, reports Advertising Age. But the battle for dominance is just beginning, as yoghurt upstarts and stalwarts pump new money into big marketing campaigns, seizing on the growing American appetite for rich, creamy, protein-packed blends.

Greek yoghurt “will be the battlefield in the dairy case — both in advertising and in store,” said food industry analyst Phil Lempert, who runs the site Supermarket Guru.

Advertising Age reports that the two private dairy companies, Fage and Chobani, who have been key in growing Greek yoghurt from a $33 million category in 2007 to a $469 million juggernaut as of late last year, accounting for 12% of all yoghurt sales, according to Mintel, have both recently embarked on national TV marketing campaigns. Fage (pronounced “fa-yeh”) has about a 25% Greek-yoghurt share.

Meantime, global dairy giant Alpina, which is an $800-million dollar company with a presence in more than 20 countries, is plotting a big splash this spring in the US to capitalise on yoghurt’s new popularity. Though it is not introducing a Greek yoghurt, the company’s campaign will tout its regular yoghurt as “indulgently creamy.” While it’s not entering the Greek yoghurt category, Alpina’s going after the same demographic, with a positioning that the yoghurt is thick and a natural source of energy.

Dannon, Kraft Foods and General Mills have been late to the party with Greek varieties but are expected to make up for lost time with their vast ad budgets and distribution networks. Dannon, for instance, is seeking to mass-market Greek yoghurt, just as it has with its regular brands, which it has no intention of betraying.

General Mills’ Yoplait — the leading seller of regular yoghurt with $1.4 billion in sales in the year ending Feb. 20, according to SymphonyIRI — came out with its Greek variety a year ago, but recently reformulated it with a thicker texture, new flavours and brighter-colored packaging.

What’s remarkable about Greek yoghurt’s rise is that it basically came out of nowhere, driven almost entirely by changing consumer tastes and without the corporate hype that normally surrounds growing categories, said one expert. “It wasn’t as if there was an obvious sort of marketing push,” said Bill Patterson, a Mintel analyst. “Greek yoghurt just kind of leapt on the scene. It truly was consumer-driven, which is really quite unusual.”

A longtime staple in the European diet, Greek yoghurt has only recently caught on in the U.S. as health-conscious consumers gravitate toward products with simple ingredients. Greek varieties are strained through a cloth or filter, removing whey. The result is a thicker, creamier yoghurt with twice the protein as ordinary brands, according to Mintel.

The Greek growth helped make the entire yoghurt category the 11th-fastest consumer-packaged-good category — food or otherwise — for 2010, with unit sales spiking 5.6%, according to SymphonyIRI. And the good news for yoghurt makers is that it was one of only four categories in the top 11 in which average prices also increased, up by 1.4%. (The average consumer-packaged-good category grew by 1.2%, with pricing falling 1%.)

The average American now eats yoghurt 7.5 times a month, up from seven five years ago. That’s still a fraction of the frequency in Europe, suggesting there’s plenty of room to grow stateside, according to Mintel.

Tertius Cilliers of dairy innovation hub Research Solutions/Danisco, comments that US-style Greek yoghurt could be an interesting permium innovation waiting to happen in South Africa. While its soaring popularity in the US rests on both its thick, creamy mouth-feel and healthy eating positioning ie a high protein-low fat content (6 to 7% protein and 3 to 3,5% fat), in SA Greek yoghurt is just the opposite: an indulgent product with a fat content of 6 to 8% and 3% protein.

Cilliers says upping the protein content of yoghurt is achieved either by adding milk solids or via ultra-filtration, expensive technology that but a few dairies have in this country. The cost of boosting protein content of yoghurt, by whatever means, in SA’s super price-sensitive market is, he believes, the reason why Greek yoghurt is likely to stay a small category, but that a high protein-lower fat version could well find a legion of more affluent fans who would relish its creamy eating quality without any downside.