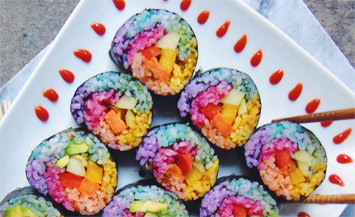 Starbucks began selling “Unicorn Frappuccinos” in the US last week, a colourful kaleidoscope of a drink, breathing new life into a food trend that had been willed into existence by a torrent of carefully composed pictures shared on Instagram and other social media sites.

For the unaware: “Unicorn food” is any food item jazzed up with dye or cute accessories like fruit cut into little shapes or mountains of pastel marshmallows. 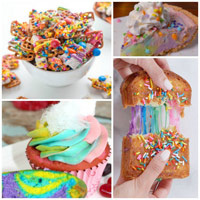 The highly committed may add a horn, ears and a mane made of sculpted sugar.

This might happen to a cupcake, a piece of toast or a cup of coffee. It has been going on for roughly a year on both social media and in a handful of hip cafes. No unicorns are believed to have been harmed, so far.

It is all kind of a lot. And it is unlikely to stop any time soon thanks to Starbucks, whose short-term journey on this particular bandwagon (their unicorn drink was only on the menu for five days) was greeted with both excitement and confusion online. For many, it was their first encounter with unicorn-themed foodstuffs.

Starbucks sent out a news release perhaps unsurprisingly filled with fairy tale language: “Like its mythical namesake, the Unicorn Frappuccino blended crème comes with a bit of magic,” it said. In statements to the news media, the company twice referred to the drink as “magic”.

The New York Times spoke to one of the people who kicked off the “unicorn food” trend: Adeline Waugh, 27, a health and wellness blogger and food stylist in Miami.

Waugh inadvertently helped start the trend last year after experimenting with a natural food dye — beetroot — to “add a pop of colour to my photos,” she said. “I was never intending to start a trend.

“I posted it, and all my followers started saying it looked like a unicorn, so I said you’re right, and I started calling it that too,” she said.

“Then all of a sudden all these people were making it and tagging it, and now the unicorn thing has gotten just insane.”

Besides imitators, Waugh said she has also gotten attention from book publishers and, of course, online haters who sometimes leave nasty comments under her Instagram pictures.

“People get so mad about toast, it is crazy,” she said.

Much of what calls itself “unicorn food” online bears little resemblance to Waugh’s initial creations, which were designed with both nutrition and aesthetic value in mind.

The dye is made from cream cheese and crushed up natural ingredients like chlorophyll, for green or crushed up, freeze-dried blueberries for purple, she said. Her work contains no marshmallows, artificial dye or towering horn-shaped fondants. There is nary a sprinkle in sight.

“The cream cheese version really just tastes like cream cheese,” she said. “It doesn’t have a strong flavour. It’s more for aesthetic purposes.”

Since then, people — those who eat food and those who just like to photograph it — have gone wild for rainbow bagels, unicorn lattes and the classic sprinkle. So many sprinkles, on top of cakes and ice creams, and sometimes both at once.

Starbucks said its new drink is made, in part, from “white mocha, classic syrup and blue citric acid powder,” but it was not clear how closely the recipe adhered to the all-natural ethos that helped spark the trend.