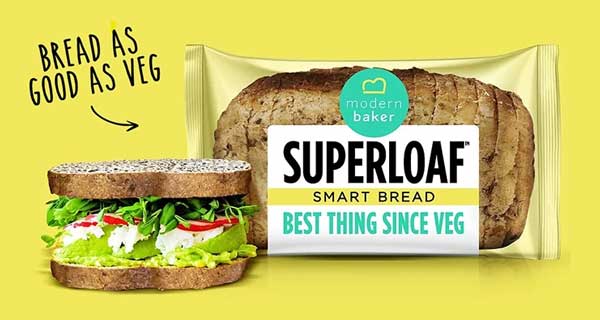 Packing in 12 high-fibre, plant-based ingredients and no additives, Modern Baker’s Superloaf claims to be as healthy as eating vegetables, and has won the praise of ‘gut guru’, Dr Tim Spector.

While bread is perceived as a simple and staple food, today’s packaged bread often contains added sugar and additives, such as emulsifiers, resulting in a long ingredient list.

Many packaged bread products found on supermarket shelves today are considered ‘ultra-processed’, according to the NOVA food classification system, which categorises foods as either unprocessed, minimally processed, processed, and ultra-processed.

Modern Baker is a small UK baked goods manufacturer but describes itself as a life sciences company. The Oxford-based company says it is committed to tackling diet-related non-communicable disease by producing healthier packaged foods.

“Food has overtaken tobacco as the world’s biggest premature killer,” it says. “As a threat to humanity, diet-related chronic Illness now stands right alongside climate change. A major culprit is ‘fast carbs’ – refined carbohydrates detached from any meaningful fibre. This accounts for most of the bread and baked good on sale.”

Modern Baker’s classic house loaf is made from just three kitchen-cupboard ingredients – flour, water and salt – and it uses a variety of grains, such as Khorasan (kamut wheat), spelt, and rye for its other products. Its sourdough loaves and biscuits are fermented for 48 hours, which optimises the pre-digestion of sugars and other enzymes in the carbohydrates, resulting in a lower glycaemic index (GI).

Its recently launched Superloaf has been formulated to optimise gut microbiome health through a diverse mix of plant-based fibres and ingredients. The product recently won the praise of Dr Tim Spector, epidemiologist and champion of promoting gut biodiversity through a healthy and varied diet, who tweeted: “Could this be the future of more healthy foods? A multi-seed bread with around 12 distinct plants making it in theory very gut friendly.”

However, formulating Superloaf was no easy task, explained Melissa Sharp, co-founder of Modern Baker. One of the biggest challenges was ensuring the functional components retained their potency despite the processing challenges of fermentation, which occurs in an acidic and moist environment; baking with steam, which requires high temperatures for a significant duration; and the target seven-day shelf life, Sharp said.

“We went through nearly one thousand iterations,” she told The Ingredients Network.

Sharp and her fellow co-founder, Leo Campbell, considered adding probiotics to the bread to further promote gut health but decided against it for two reasons.

“Firstly, on a practical level, isolated probiotics are extremely heat sensitive, so incorporating into baking results in them becoming denatured and of no benefit other than on-pack disinformation,” Sharp said.

“Secondly, and more importantly, we believe rather than encouraging people to consume probiotics it’s much more beneficial for them to improve the efficacy of their natural gut microbiome population by feeding it the optimal prebiotic fuel on which it thrives. [This] is the where the wider ingredient mix [that] we have developed comes into it.”

Modern Baker was founded in 2014 and launched its first organic, sourdough products in 2018 via specialist and premium retailers such as Planet Organic and Selfridges.

Superloaf, which recently launched online via Amazon Fresh, retails for £2.80, a price that places it between mass-produced, packaged bread and premium, artisanal loaves. Campbell said that within 18 months it would have an expanded range on the market, including products priced to access a wider consumer base.

White bread is not bad for you, experts say
Probing the gluten-free trend: is it all in the mind?
Sasko launches a new range of speciality loaves
Consumers nudges SA bakers to cut controversial ADA bread…
Share
Print page
0 Likes
Posting....
Thanks for subscribing!