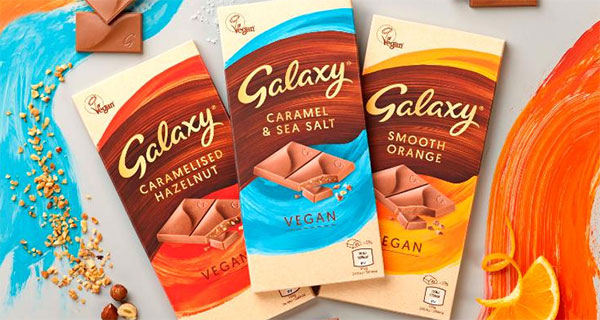 Mars is launching a new line of vegan chocolate bars in Britain, becoming the first major confectionery company to offer a plant-based alternative to milk chocolate.

As part of its popular Galaxy range, the new variant will be available in three flavours: caramelised hazelnut, caramel and sea salt, and smooth orange. At £3 for a 100g bar, the cost is three times more than the regular Galaxy options.

Kerry Cavanaugh, unit director of chocolate at Mars, said the UK vegan market is “impossible to miss” and “evolving so quickly.”

“Wherever you look you can’t avoid the vegan buzz in the UK — even though vegan treats are currently only worth £10-million in a £4-billion chocolate market,” he said in a statement.

In 2018, the UK overtook Germany to become the nation with the highest number of new vegan products, according to market intelligence agency Mintel.

Mintel said that as many as one in six food products launched last year in the UK had a vegan or no animal ingredients claim, doubling from 8% in 2015.

The challenge for Mars

Cavanaugh told CNN Business that capturing the Galaxy bar’s creamy texture was the “biggest challenge” the company faced, and praised his team for developing the recipe within six months.

Milk chocolate is typically much harder to develop into vegan alternatives due to its high dairy content, which helps create its texture. Mars claims to be the first major producer of a vegan milk chocolate bar.

The new bars have been registered by the Vegan Society — an organisation that trademarks new products, guaranteeing that they are free from animal ingredients and testing.

In contrast to milk chocolate, most dark chocolate is naturally vegan as it does not contain milk products, and regularly appears in supermarkets’ dairy-free aisles.

Many dark chocolates are nevertheless not marketed as vegan, due to the risk of cross-contamination when being made in the same factories as milk chocolate products.