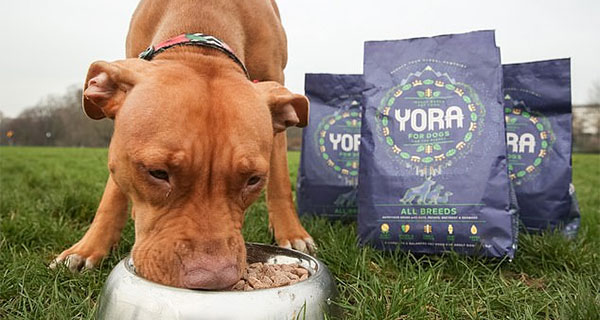 12 Jan 19 UK: Dog food made from insects to go on sale for first time

The UK’s first dog food made from insects has gone on sale, which its manufacturers say could help reduce the environmental damage caused by the massive volumes of meat routinely fed to dogs and cats.

Globally, pets consume about 20% of the world’s meat and fish, a number set to rise with the trend for consumers to feed them human-grade meat.

Pet food is also estimated to be responsible for a quarter of the environmental impacts of meat production in terms of use of land, water, fossil fuels, phosphates and pesticides.

Insects provide a relatively high 40% of the protein in the new product from startup Yora. They are dried and ground with oats, potato and “natural botanicals”. The current version comes in the form of dried pellets, although Yora says it hopes to launch a “wet” version later in the year.

Insects are also very nutritious, containing essential proteins, fats, minerals and amino acids, and are easy for animals to digest.

“Animals and humans have been eating insects since the dawn of time” said Yora founder Tom Neish. “We have trialled 29 recipes to find the perfect combination of great tasting ingredients and are very proud of the end result. Yora enables dog owners to take the lead in giving their dog a nutritious, tasty food while having a positive impact on the environment.”

In November, Sainsbury’s became the first major UK grocer to stock edible crickets – barbecued crickets sold as snacks in small bags. In total, more than 1,000 insect species are eaten around the world but hardly feature in the diets of many rich nations.

The insects in Yora’s dog food are the larvae of black soldier flies (Hermetia illucens) which are reared by protein nutrient company Protix in Eindhoven in the Netherlands.

They can turn vegetation that would otherwise be wasted into body mass quickly and sustainably. Other dog foods made from bugs have been launched in the US and Germany, but with a lower insect content.

Yora is named after one of the last uncontacted tribes in the Amazon rainforest, which is threatened by the rising demand for farmland to meet the world’s booming appetite for meat.

Neish, who is developing a similar food for cats, admits it could be a challenge to persuade the public to ‘get over the ick factor’.

‘Once you overcome your preconceptions it’s actually quite tasty. It has a slightly mushroomy flavour. I’ve tasted quite a few insects in my trials because I don’t think I should feed a dog anything I wouldn’t eat myself,’ he comments.

Purina launches pet food with plant and insect proteins
Insects are food: time to eat them!
The SA startup making ice-cream from insect milk
Edible insects set to be approved by EU