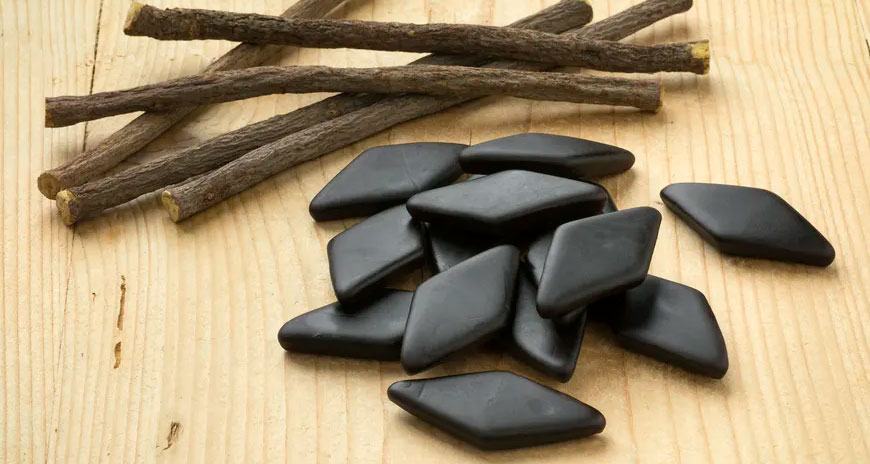 30 Dec 20 The spooky and dangerous side of black liquorice

Black liquorice may look and taste like an innocent treat, but this candy has a dark side. This article was one of the top five ‘most read’ articles on the US edition of The Conversation in 2020.

On Sept. 23, 2020, it was reported that black liquorice was the culprit in the death of a 54-year-old man in Massachusetts. How could this be? Overdosing on liquorice sounds more like a twisted tale than a plausible fact.

I have a longstanding interest in how chemicals in our food and the environment affect our body and mind. When something seemingly harmless like liquorice is implicated in a death, we are reminded of the famous proclamation by Swiss physician Paracelsus, the Father of Toxicology: “All things are poison, and nothing is without poison; the dosage alone makes it so a thing is not a poison.”

I am a professor in the department of pharmacology and toxicology and author of the book “Pleased to Meet Me: Genes, Germs, and the Curious Forces That Make Us Who We Are.”

The root of the problem

The unfortunate man who recently succumbed to excessive black liquorice consumption is not alone. There are a smattering of similar case reports in medical journals, in which patients experience hypertension crisis, muscle breakdown or even death.

Adverse reactions are most frequently seen in people over the age of 40 who are eating far more black liquorice than the average person. In addition, they are usually consuming the product for prolonged periods of time.

In the most recent case, the Massachusetts man had been eating a bag and a half of black liquorice every day for three weeks.

liquorice is a flowering plant native to parts of Europe and Asia. Its scientific name, Glycyrrhiza, is derived from the Greek words “glykos” (sweet) and “rhiza” (root). The aromatic and sweet extract from its root has long been used as an herbal remedy for a wide variety of health maladies, from heartburn and stomach issues to sore throats and cough. However, there is insufficient evidence to support that liquorice is effective in treating any medical condition.

Glycyrrhizin (also called glycyrrhizic acid) is the chemical in black liquorice that gives the candy its signature flavour, but it also leads to its toxic effects.

Glycyrrhizin mimics the hormone aldosterone, which is made by the adrenal glands when the body needs to retain sodium and excrete potassium. Sodium and potassium work together as a kind of cellular battery that drives communication between nerves and the contraction of muscles. Too much glycyrrhizin upsets the balance of these electrolytes, which can raise blood pressure and disturb the heart’s rhythm.

Other symptoms of excessive liquorice intake include swelling, muscle pain, numbness and headache. Examination of the man who died from consuming too much liquorice ice revealed that he had dangerously low levels of potassium, consistent with glycyrrhizin toxicity.

It should be noted that a number of liquorice-based foods do not contain real liquorice, but use a flavouring substitute called anise oil, which does not pose the dangers discussed here. In addition, despite its name, red liquorice rarely contains liquorice extract. Instead, it is infused with chemicals that impart its cherry or strawberry flavour.

Glycyrrhizin has the distinct liquorice flavour and is 50 times sweeter than sugar and has been used in other types of candy, soft drinks, tea, Belgian beers, throat lozenges and tobacco. This can make it challenging to keep track of how much glycyrrhizin has been consumed, and a combination of these products could trigger adverse effects.

Some people take dietary or health supplements that already contain liquorice, which increases the risk of toxic effects from eating black liquorice candy. Certain medications such as hydrochlorothiazide are diuretics that cause increased urination, which can lower potassium levels in the body. Glycyrrhizin also lowers potassium levels, further disrupting the balance of electrolytes, which can produce muscle cramps and irregular heart rhythms.

For example, patients who already have low potassium levels (hypokalemia), high blood pressure or heart arrhythmia are likely to have greater sensitivity to the effects of excessive liquorice. Those with liver or kidney deficiencies will also retain glycyrrhizin in their bloodstream for longer times, increasing their risk of experiencing its adverse effects.

If you’re a fan of black liquorice, there is no need to ban it from your pantry. Eaten in small quantities from time to time, liquorice poses no significant threat to otherwise healthy adults and children. But it is advisable to monitor your intake.

When Halloween approaches, be sure to remind your kids that candy is a “sometimes food,” especially the black liquorice. The FDA has issued warnings about the rare but serious effects of too much black liquorice, advising that people avoid eating more than two ounces of black liquorice a day for two weeks or longer. The agency states that if you have been eating a lot of black liquorice and experience an irregular heart rhythm or muscle weakness, stop eating it immediately and contact your health care provider.

Some scientists have further cautioned against the routine use of liquorice in the form of a dietary supplement or tea for its alleged health benefits. A review article from 2012 warned that “the daily consumption of liquorice is never justified because its benefits are minor compared to the adverse outcomes of chronic consumption.”