30 Mar 17 The science of liquorice: whether you love the dark root – or hate it 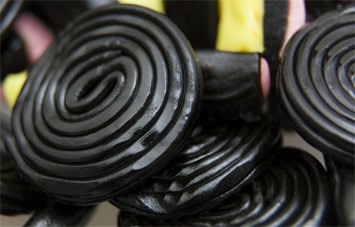 There are foods that can split families, or even just couples. Love it or hate it foods. Marmite (and the Antipodean alternative, Vegemite) is one. Then there’s Brussels sprouts, blue cheese, chilli peppers, coriander (cilantro), tomatoes (especially the cooked variety) … and liquorice.

Personally, I’ve always liked liquorice, but there are others who feel very differently about it. There are known to be genetic reasons behind a dislike of some foods such as Brussels sprouts or coriander but no one has established this for liquorice.

Liquorice has a long history; the root of the plant Glycyrrhiza glabral has been used medicinally for over 4,000 years.

Liquorice has anti-inflammatory, antibacterial and antiviral properties and has been used, notably in traditional Chinese medicine, for the treatment of gastric ulcers and liver disorders, such as hepatitis B.

Among its less beneficial effects on the body is raised blood pressure, caused by the glycyrrhizic acid it contains, if you eat too much.

Through its interaction with the hormone aldosterone, it causes reabsorption of sodium and excretion of potassium, resulting in an increase in sodium levels and a decrease in potassium levels – one symptom of which is muscular weakness.

And pregnant women have been advised to avoid it because it pushes up levels of cortisol, the stress hormone.

A study just published upon which this advice is based, drew on several hundred children born in Finland in 1998. They found that mothers who ate more liquorice (salmiak, liquorice with added ammonium chloride) gave birth to children who were more likely to have lower IQs and to suffer from ADHD.

We more usually think of liquorice in confectionery, where an extract of raw liquorice is heated up with other ingredients such as flour, treacle, flavourings and colourings to produce a sweet, thickened product.

In Britain, it is closely associated with the Yorkshire town of Pontefract, where it was first grown nearly 1,000 years ago after it was brought to Britain from the Middle East.

In 1760, an apothecary named Charles Dunhill first produced “Pontefract cakes”, flat, circular sweets. Dark salty liquorice is hugely popular in northern European countries such as Holland and Sweden. Liquorice is used as a flavouring in substances as diverse as tea and tobacco, and in drinks like the Egyptian erk sous and the French pastis.

The sweetness of liquorice is principally due to the glycyrrhizin (or glycyrrhizic acid), which is around 40 times sweeter than sucrose (table sugar).

The aromas of raw liquorice and heat-processed liquorice are due to a blend of chemicals, recently identified by a research group in Munich, led by Peter Schieberle, a distinguished flavour scientist.

The team achieved this by first separating the complex mixtures of chemicals present in the liquorice, and then identifying each one by spectroscopic techniques. Aroma experts then examined each compound to find which of the molecules present actually contributed towards it (around 50).

Finally, they reconstituted a mixture of these molecules, each present at its “natural” concentration, to see if the mixture had the characteristic liquorice smell (it did).

So there is no single molecule which has a liquorice smell by itself; what we smell is a blend of odours from all these molecules, which our brain “integrates”.

The molecules anethole (also found in aniseed, fennel and star anise) and estragole (also found in tarragon) supply an “aniseed” note, but there are many other important compounds that contribute, including 1,8-cineole eucalyptus, 2-acetyl-1-pyrroline, responsible for the “popcorn” note of many cereal products like bread and rice, and a number of aldehydes such as (E,Z)-2,6-nonadienal (found in cucumbers).

The heat-processed liquorice extract has many molecules in common with raw liquorice, but some are unique to it like maltol, which contributes a caramel note, and 3-hydroxy-4,5-dimethylfuran-2(5H)-one (sotolone), also with a caramel note at low concentrations and which is responsible for the flavour of raw cane sugar.

Many of the extra molecules are generated in the heating process from reactions, such as those between sugars and amino acids present in the raw liquorice root.

So enjoy your liquorice – if you do. Just don’t overdo it.

The Conversation, authored by Simon Cotton, Senior Lecturer in Chemistry, University of Birmingham.