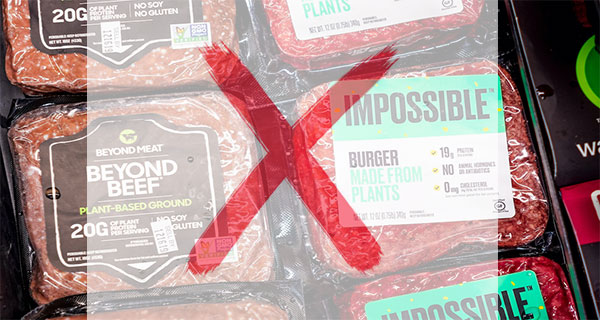 The Department describes the use of phrases such as “mushroom biltong”, “plant-based meatballs” and “vegan nuggets” as “illicit” because the products do not meet the definition of “processed meat” under the country’s Regulation No.R.1283.

This week, in a letter addressed to “All processors, importers and retailers of meat analogues”, the DALRRD instructed that meat analogues “must not use the product names prescribed and reserved for processed meat products”.

The letter also instructs the Food Safety Agency, the assignee designated for the inspection of processed meat products, to seize and remove any plant-based products using names that traditionally refer to animal-based products in terms of section 8 (“Seizures”) of the Agricultural Product Standards Act 199 of 1990 (“the APS Act”).

Commenting on the development, pro-plant food lobbyist, ProVeg South Africa, said, “What is seemingly an interpretation of existing regulations, is in fact an extreme interpretation and is, essentially, creating new legislation. The measure also flies in the face of the government’s own plans to introduce legislation to tackle climate change.”

It pointed out that in the National Climate Change Response White Paper, the South African government admits that “land-based human activities, such as forest clearing and unsustainable agricultural practices, are not only increasing green house gas (GHG) emissions from these sources, but are also reducing the earth’s natural ability to absorb GHGs”.

“Yet, now, this very government’s Department of Agriculture, Land Reform and Rural Development is aiming to disrupt a prosperous economic sector that could help South Africans mitigate their carbon footprint,” ProVeg said.

“This is a huge step backwards in the government’s fight against climate change,” Donovan Will, country director at ProVeg South Africa said. “Regulation such as this is exactly what we don’t need when the world’s scientists are telling us we urgently need to reduce our meat consumption to help brake dangerous global warming.”

Just Egg under scrutiny, too

It’s not just plant-based meat alternatives that have come under fire. Following a supposed meeting between DALRRD and the Food Safety Agency, another letter was sent, this time to Woolworths. The supermarket giant was instructed that the plant-based egg substitute Just Egg could not be sold as “eggs” as it does not hail from domestic fowl.

The letter further claims that the use of the name/claim “eggs” in the descriptions “just egg” and “4 folded plant eggs” is regarded as “misleading”.

ProVeg accuses the egg industry of wanting to protect its market share rather than the customers it claims are being misled by transparent and honest packaging and marketing. In fact, banning the use of meat or egg-related terms might cause more confusion for customers who have grown to like or even need these alternatives, the organisation said.

“The regulation disrespects consumers,” Will commented. “There is no evidence to show that people are confused by meaty names for plant-based foods. In fact, evidence from Australia, Europe and the US prove they are not confused.”

ProVeg said the meat and egg industries are essentially claiming a monopoly on the term “meat” and “egg” and all other related terminology, where the alternatives should be able to use these terms because they effectively mimic the taste, texture and use of the products they replace.

According to ProVeg, as long as products are clearly labelled as “meat-free”, “vegan”, or “vegetarian”, the terminology is not misleading. They are marketed as alternatives to meat and do not claim to be meat from an animal source.

“We believe there will be a heavy toll [for consumers]. If people are looking, e.g., for a substitute for chicken and the producer is not allowed to refer to it as a “chicken” alternative, then how are consumers supposed to find it or know what it is?”

A similar restriction on the naming of plant-based products referred to as the “veggie burger ban” was proposed by the meat industry in Europe in 2019 but was defeated in the European Parliament in 2020 after a sustained campaign by ProVeg International and many other groups.

But the 2020 EU banning of dairy terms such as milk, butter, whey, yogurt or cream from being used for dairy plant-based alternatives remains.

“We really urge the government to overturn this regulation. At a time when countries are seeking ways to tackle climate change, we must do all we can to encourage a vibrant and innovative plant-based sector,” Will said.

For more on how other countries are dealing with this conundrum, read this FoodIngredientsFirst.com article here.