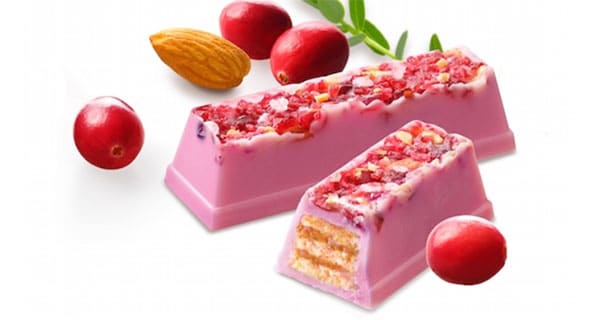 The world’s largest food company, Nestlé, is expanding its ruby chocolate range a year after the pink KitKat became a viral sensation in Asia.

As the first new type of chocolate in 80 years celebrates its one-year anniversary, Nestlé is launching a new type of ruby KitKat in Japan that contains dried cranberries and nuts. Consumers can also share ideas for uses of the chocolate with rubychocolate.com, a new website started by ruby’s inventor and top cocoa processor Barry Callebaut.

Ruby chocolate first hit the market when Nestlé launched its KitKat version in Japan last year. While distribution was kept limited initially, the buzz created around this naturally pink-hued and fruity-flavoured chocolate — the fourth type of chocolate after milk, dark and white — has helped it reach 26 markets now, said Cedric Lacroix, MD for Nestlé’s confectionery business in Japan.

“When it comes to food and chocolate, in particular, trends used to be created in Western Europe and North America, but today trends are made in Asia, and Japan among others,” said Lacroix. “Asian consumers are extremely open to new things and they are extremely astute when it comes to social media.”

Since its launch, the new chocolate variety has had more than 120-million search results on Google.

“The value of the buzz we generated right from the launch has been stunning and motivated us to launch and broaden distribution,” Lacroix said. “The word of mouth that was created was above any type of paid media we could have invested in.”

Still, establishing ruby chocolate may take a little more work than social promotion. Callebaut still isn’t marketing the product in the US, the world’s largest chocolate market, because it’s in the process of getting approval by the US FDA.

Elsewhere, Callebaut is hoping to leverage online buzz with its new consumer-populated website. An algorithm will scan social media platforms for references to ruby chocolate and bring them together on the site, said Bas Smit, global vice-president of marketing at the Zurich-based company, the world’s largest maker of bulk chocolate.

The platform will also allow an exchange of ideas about what products could be made from ruby next and questions can also be put to consumers, such as if they are interested in ruby chocolate Oreos or a Galaxy ruby, he said.

More than 40% of the Japanese population is aware of ruby chocolate and 5% have already tasted it, according to market researcher Macromill. Just more than 80% of people say they are interested in trying it in the future, according to the research based on 800 respondents in Japan.

By keeping its ears close to the consumer on social media, the chocolatiers can also receive instant feedback on whether their new range is a hit or miss.