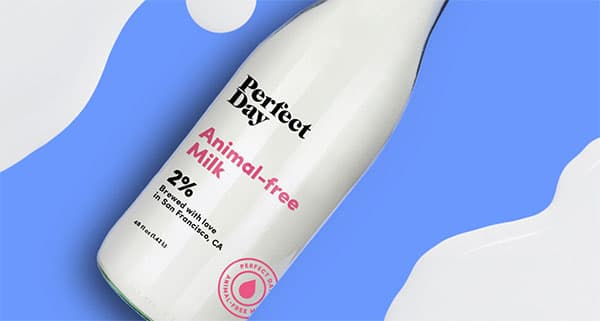 FOODStuff SA has featured the fascinating dairy-without-cows story of Perfect Day in the past but now comes news that it is a winner of Fast Company’s 2021 World Changing Ideas Awards.

Perfect Day, a US start up, uses fungi to grow whey and casein, the proteins found in cow’s milk. When they’re used to make ice cream, it tastes exactly like the real thing . . . because it is.

If you try to avoid dairy products, you’ve probably tried ice cream made from soy milk, or coconut milk, or oat milk. They can be good, but the reality is that it’s hard to make plant-based ice cream or cheese or yoghurt that truly tastes like real dairy. That’s why the startup Perfect Day uses real milk proteins in its products — but it grows the proteins with fermentation, not cows.

“We grew up eating everything: dairy, eggs, meat,” says Perfect Day cofounder Perumal Gandhi, who started the company with Ryan Pandya shortly after graduating from MIT in 2014.

“Like many of our friends, we gave up meat to go vegetarian when we started college, and then finally made the leap to a fully plant-based vegan diet. We realised that being vegan is actually pretty difficult, because all the alternative products that were available either didn’t taste that great, or didn’t have a lot of nutrition in them, or just cost a lot more money.”

The keys to better taste, they realised, were the milk proteins whey and casein, which are responsible for giving dairy a creamy texture.

“From a functionality standpoint, that stretch in your mozzarella cheese, or the ability to bind to air to give you that creamy texture in ice cream, that’s all the protein doing its magic,” Gandhi says.

By taking the genetic code that cows use to make the protein and introducing it into microorganisms, it’s possible to begin producing identical dairy proteins in bioreactors, similar to the tanks that breweries use to make beer.

When they launched Perfect Day — the winner in the food category of Fast Company’s 2021 World Changing Ideas Awards — the founders (both 23) hoped to have a glass of milk ready to go within months. But it took six and a half years to bring the first product with its animal-free dairy proteins to market: Brave Robot, a brand of ice cream that tastes indistinguishable from traditional ice cream.

A spinoff called the Urgent Company created the new brand and is now working on bringing other products to market, including cheese. The company is also beginning to supply ingredients to larger food manufacturers.

Perfect Day takes a different approach from other startups in the space that are attempting to create challenger brands to take on legacy companies. Instead, Perfect Day says it can have a bigger impact through partnerships with established enterprises, selling them its animal-free protein to use as an ingredient in their existing and new products.

Their goal is to make products that appeal to dairy lovers, not just avowed vegans (it’s also digestible for people who are lactose intolerant). “It’s pretty hard to scale a behavioural change from a people standpoint,” he says. “So our approach to that was just let’s address the problem with technology and make the same product that people want.

“Now, of course, people want a lot of dairy, which means the scale we need to get to is pretty significant for this to have any real impact. If you’re just making a small amount of something, you’re really not pushing the world forward.”

In a new lifecycle analysis of its products, the company calculated that producing its whey protein reduces greenhouse gas emissions between 85% and 97% compared to traditional dairy. The company is now focused on building up a larger supply chain, working with partners such as Archer Daniels Midland (ADM).

A shift away from dairy would make a difference. While the conversation about food and climate change usually focuses on meat, dairy also has a significant footprint. By one calculation, it’s responsible for more than 3% of the world’s greenhouse gas emissions — far more than the entire aviation industry.

“Animal agriculture worked when they were three billion people,” Gandhi says. “It’s not going to work when we add nine billion over the next few decades.”