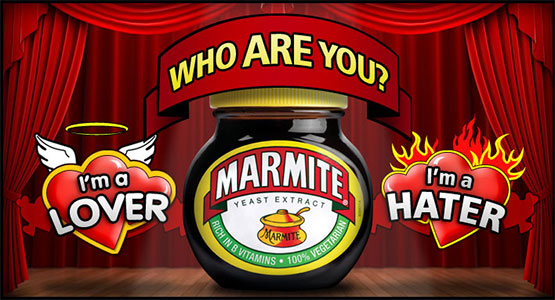 27 Aug 21 Marketing Marmite: the story behind the iconic love/hate campaign

When it comes to Marmite, “you either love it or hate it”. In fact, the idea that their country is hopelessly divided by yeast extract may be one of the few things that British people agree on.

The Koreans have kimchi. The Romans had garum. But no umami-rich condiment is as controversial as Marmite, the black elixir lurking in many a British [and South African] larder.

A recent shortage of Marmite in Britain and other countries – the result of a hiatus in brewing during the pandemic – caused panic among lovers of the savoury spread. Haters, on the other hand, rejoiced in its absence from supermarket shelves.

At some point in the last decade or so, “Marmite” became a byword for something or someone polarising. The notion that it’s impossible to be ambivalent about Marmite is embedded in the British psyche. Yet it was planted there not by arguments over breakfast tables, but by an advertising agency.

This is the story of how a stroke of copywriting genius helped a failing brand with an unappetising-looking product become part of the national conversation.

In the mid-19th century Justus von Liebig, a German scientist, discovered that adding salt to spent brewer’s yeast caused the yeast to digest itself. Once concentrated, centrifuged and supplemented with vegetable flavourings, the tar-like substance became something vaguely edible. It is an undistinguished creation story for an icon of British cuisine.

That yeast extract found an adoptive home across the North Sea surely owes something to the British propensity for putting things on toast and calling it a meal (Welsh rarebit and baked beans on toast being other fine examples).

So, in 1902, the Marmite Food Extract Company was formed in the Midlands in Burton-upon-Trent, capital of Britain’s brewing industry.

The exotic French nomenclature – an earthenware marmite (cooking pot) still adorns the label – suggests some lingering anxiety about the gastronomic credentials of this strange new paste. A little Gallic burnishing might allow buyers to imagine that the sticky industrial by-product had in fact been concocted in the kitchen of some celebrated saucier.

The manufacturers needn’t have worried. The discovery of vitamins, which were first isolated in 1912 and continued to be identified in the following decades, gave Marmite its raison d’être. Unique among foods around at the time, Marmite turned out to be packed full of the B-type.

It soon became a health food. The Lancet, a medical journal, recommended it as a cure for anaemia. One advertisement from the 1950s proposed Marmite Milk Jelly as a sort of wobbly panacea for “when you’ve been ill”. Marmite was sent to nourish troops in the first world war and to prisoner-of-war camps in the second. For most of the 20th century, marketing Marmite was easy: not only was it good for you, it helped Britain win wars.

Like many things, Marmite’s fortunes declined in the 1970s

The “growing-up spread” had been sold to mothers at health clinics in village halls in a bid to get the next generation hooked on the black stuff. (Studies showed that you were more likely to like Marmite as an adult if you’d been fed it as a child.) But the reorganisation of the National Health Service in 1973 saw these clinics replaced by purpose-built welfare centres. Selling products was no longer allowed.

With its main point-of-sale cut off, Marmite consumption declined, exacerbated by concerns about eating too much salt, as well as the rise of the breakfast cereal. By the mid-1990s, the brand was failing.

It fell to BMP DDB, a catchily named advertising agency, to make Marmite cool. Andy McLeod and Richard Flintham, the young creative duo tasked with the brief, had a tough job: consumers thought that Marmite smelt “disgusting” and looked “like a brown stain on toast”, according to research the agency did.

McLeod recalls the moment they cracked the problem. “I remember sitting in my office looking at the brief and saying to Richard, ‘I fucking hate Marmite.’ And he said ‘Oh, I love it.’ And we both just looked at each other.”.

The “Hate/Mate” campaign launched in 1996 with two 30-second ads designed to bookend advert breaks, set to the song “Low Rider” by War. The first featured people salivating over and bathing in the product, to the refrain “My Mate, Marmite” (a slogan lifted from a previous campaign by Ogilvy). The second showed people spitting it out, sticking pins in jars and throwing them in chains to the bottom of the sea, accompanied by the lyrics “I Hate Marmite”.

“To say that people might hate your product was considered a very brave thing to do,” says Paul Feldwick, a brand consultant who worked at BMP DDB at the time. But the campaign’s irony and self-awareness struck a chord with members of Generation X, who had become cynical about traditional marketing strategies.