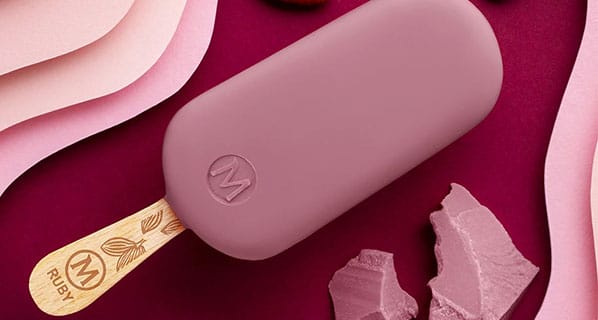 Unilever’s ice cream mega-brand, Magnum, has launched a new line of Ruby chocolate-covered mini ice creams in the US. This is the first brand in the US to launch an ice cream featuring the fourth type of chocolate.

The ice creams are available in packs of six bars at select retailers now and will be rolled out to grocery stores nationwide by February.

The launch comes after the US FDA granted a Temporary Marketing Permit to Barry Callebaut – Ruby’s supplier – in November 2019, allowing the marketing of Ruby as the fourth type of chocolate, after dark, milk and white, in the US.

Ruby chocolate, officially launched by Barry Callebaut in September 2017 in Shanghai, China, after more than ten years of development. The company first introduced Ruby in the US in May 2019, following successful roll-outs in Asia, Europe and Australia/New Zealand.

The Ruby cacao bean is unique due to the fresh berry fruitiness and color precursors naturally present in it. The cacao beans are sourced from different regions of the world and have a specific set of attributes unique to the fourth type of chocolate. Ruby cacao beans grow in countries known for cacao: Ecuador, Brazil and the Ivory Coast.

Since its launch, Ruby chocolate has been introduced in Asia Pacific, Europe, the Middle East and South Africa by both consumer and artisanal brands.