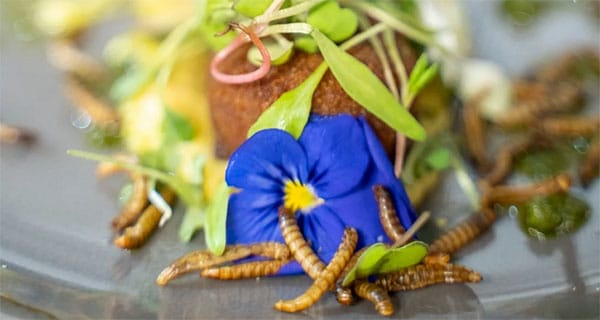 South Africa’s first all-insect restaurant is open for business – and the bugs dishes are, reportedly, delicious!

Business Insider SA got a preview of bug-inspired meals designed by chef Mario Barnard, who first started cooking with bugs after a trip to Thailand where he was encouraged to eat tarantulas and scorpions.

“They were a little bit hard for me to eat. But, since I started experimenting with [insect-based] powders and messing with the food and hiding in it in a kind of gourmet way, I’ve found its a much easier way to eat,” said Barnard.

“We try to present it as visual as possible to Westerns to make it easy to eat.”

Gourmet Grubb was launched in 2017 on the back of research from product manager, Leah Bessa, who studied food science and insects as a protein source initially turning black fly larvae into protein power. It then transitioned to making black-fly-larvae milk and using that to make ice cream.

“Insects are very under-utilised. I was looking at modern ways of bringing insects into the food processing and how Western consumers eat, that was the original inspiration. Gourmet Grubb was a way to bring it to the forefront of people’s minds and transform consumer perception about eating insects, one of the biggest barriers to entry,” says Bessa.

“The store is about introducing South Africans to the concept of eating insects” said co-founder, Jean Laurens.

With sponsorship from Truefood and Mane South Africa, they have been able to start up The Insect Experience. Menu items include black-fly-larvae croquettes, mopane polenta, and deep fried dark chocolate black-fly-larvae ice cream.

The store officially opens today, 11 July, at the GOODFood market, albeit it has been operating for a while in the Iron Works shopping centre in Woodstock, Cape Town.

PS: Your editor sampled Gourmet Grubb’s ice creams at the SAAFFI Seminar in March this year, and was underwhelmed by the taste experience. One hopes that the input and flavour expertise of Truefood and Mane SA have made a big difference!