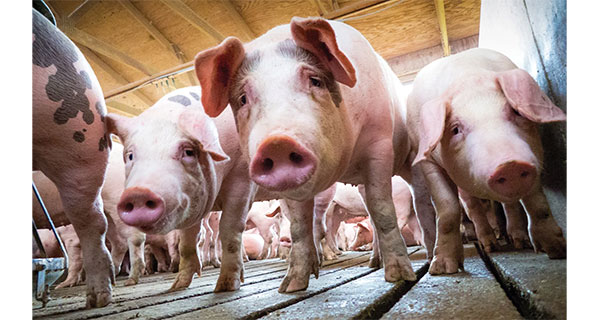 26 Mar 19 Disease-resistant pigs are here. When might we eat them?

The US FDA recently cleared the last hurdle for the first genetically engineered fish. Industry groups want pigs to be next.

Earlier this month, the FDA cleared the last hurdle for the “AquaAdvantage” salmon — the first (and only) genetically modified animal to make it to grocery stores in North America. The fish grows twice as fast as its unmodified peers, and, after 20 years in regulatory limbo, it will soon be sold in the US.

But biotechnology advocates are already looking forward to what could be next.

Developers hope the salmon can pave the way for the next generation of genetically modified animals — some of which have already been created, but have stalled under federal regulations. Scientists have designed pigs resistant to disease and cows without horns. But under current FDA rules, the American public would wait years to see (or eat) the results. What’s the hold up?

At first glance, the debate over whether to green-light products like the “AquaAdvantage” salmon falls along typical lines: the companies and public-sector geneticists who created these animals believe they’re safe for consumption and would help, not harm, the environment by reducing waste and agriculture’s carbon footprint.

Meanwhile, some politicians and federal regulators have slowed down the process, citing the agency’s high safety standards. (Even so, the FDA’s 2015 review found that “this fish is safe to eat, [and] the genetic construct added to the fish’s genome is safe for the animal.”)

But some scientists have urged caution: Natalie Kofler, molecular biologist and founder of the CRISPR think tank, Editing Nature, has argued that producing genetically modified animals will simply perpetuate a flawed food system, while some of biotech’s fiercest opponents may be protecting interests beside public health: Senator Lisa Murkowski (R-Alaska) has been accused of hindering the fish’s regulatory path to protect her state’s $5.9-billion seafood industry; the so-called “franken-fish” will be grown in Indiana.*

GMO pigs to the rescue

Genetically engineered pigs could make it to market within a few years, Politico reports, so the pork industry has been at the forefront of this technology — and is now pushing for less onerous regulation.

Advocates for these animals argue they make financial sense for producers: preventing and treating porcine reproductive and respiratory syndrome, or PRRS, costs farmers an estimated $6-million a day in North America and Europe.

That’s why Randall Prather, animal science professor at the University of Missouri and director of National Swine Resource and Research Center, designed a PRRS-resistant pig.

In 2015, his team isolated the protein that helps spread the virus, an innovation that the trade publication National Hog Farmer called a “genetic showstopper”.

He’s since created pigs that are resistant to another deadly disease and pigs that produce their own omega-3 fatty acids, “making their own heart-healthy pork,” Prather says.

Animal geneticists like Prather believe their creations have widespread appeal, although the American public has historically been skeptical of genetically modified organisms.

“We hear a lot of talkabout sustainability. If we’re really going to be sustainable, we can’t afford to have inputs such as fuel, feed, labour going to animals that are going to underperform or get sick or die.”

“If we can genetically edit these pigs so they don’t get sick, this is an animal welfare issue.” Randall Prather, animal science professor

As Pacific Standard has reported, current FDA rules classify genetically engineered animals as a drug, meaning they must undergo a lengthy and costly drug-approval process. These regulations frustrate biotech advocates, who say the techniques they use — snipping or swapping one gene out of three billion base pairs — are completely safe.

“The FDA shouldn’t even be in this game,” Prather says. “If you’re going to knock out a gene, what difference does it make? It’s illogical to me.” Food animals like pigs already have millions of variants in their genome.

Biotech advocates argue that whether this variation was introduced spontaneously or intentionally (by someone like Prather) makes no difference for food safety.

This week, Politico reported that industry groups want to hand the reins over to the USDA, which has had a quicker regulatory path. Geneticists also note that there’s no reason for genetically edited plants and animals to be regulated differently; there are already 10 genetically modified crops produced in the US, all safe for consumption.

Now, the geneticists ask: Why not pigs too?