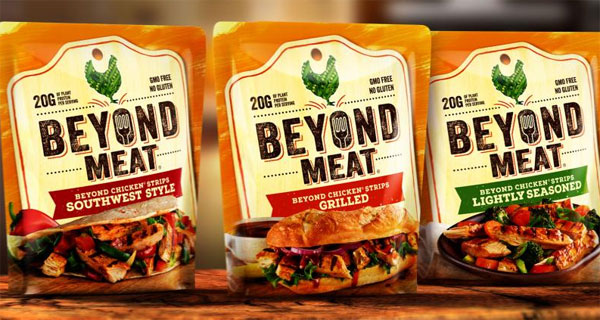 13 May 18 Beyond Meat products coming to SA shelves

US plant-based meat manufacturer, Beyond Meat, will expand its global presence in the coming months as it enters over 50 new markets around the world, including South Africa.

The brand has said it will work with leading distribution and foodservice partners to roll out its Beyond Burger to “Germany and the rest of Europe, Canada, Australia, Mexico, Chile, Israel, UAE, Korea, Taiwan and South Africa”.

Since launching the Beyond Burger in 2016, Beyond Meat has sold more than 13 million of its protein-packed patties which can be found in nearly 15,000 restaurants and grocery stores across the US.

The product is said to look, cook, and taste like ground beef from cows but is made entirely from plants, without GMOs, soy, or gluten.

Founder and CEO, Ethan Brown, says: “The company has found extensive success in the US market, doubling sales in 2017 and increasing distribution of its portfolio to more than 27,000 grocery stores and restaurants.

“These additions make it possible for us to support international launches, building upon the successful 2017 introduction of the Beyond Burger in Hong Kong.”

Based in California, Beyond Meat last year gained investment from Leonardo DiCaprio, then secured $55-million in an investment round led by Tyson Foods.

Along with its Beyond Burger, the brand sells its Beyond Sausage range, which is designed to taste like pork, and Beyond Chicken Strips.

Earlier this year it announced the construction of its new research and innovation facility in Los Angeles. A seven-fold increase of the existing research and development footprint, the new facility will allow the brand to conduct product tests with consumers to gauge shifting consumer trends.

Silicon Valley and the search for meatless meat

US meat leader invests in a plant protein-based company