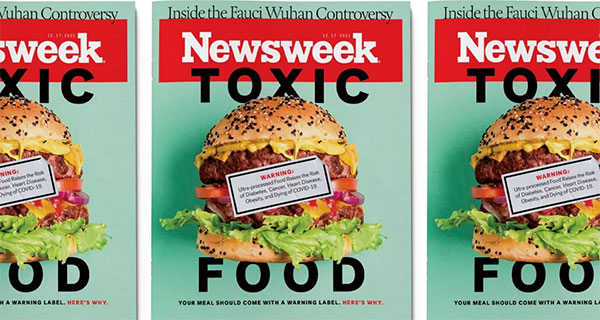 12 Dec 21 Americans are addicted to ‘ultra-processed’ foods, and it’s killing them (and us)

The health toll being wrought by the Western diet and ultra-processed food is under the spotlight in this Dec 2021 issue of Newsweek. It’s a great read…

Being severely overweight has never been so dangerous. During the COVID-19 epidemic, Americans who are obese, without any other risk factors, were hospitalised at three times the rate of those who weren’t, by some estimates.

When combined with other diet-related health conditions such as cardiovascular disease and diabetes, obesity raises the risk of hospitalisation sixfold and the risk of death twelvefold.

Those numbers have raised the stakes in the nation’s epidemic of diet-related disease and added to the growing alarm of politicians and nutrition experts, some of whom are starting to call upon regulators to rein in food companies. They’re pushing measures similar to those used to curb the influence of tobacco companies in the 1990s, such as limiting the marketing of certain kinds of food to children and actively discouraging the consumption of key ingredients — chief among them, sugar.

At issue is the explosive growth in a broad class of food products that are not merely processed in the conventional sense to lengthen shelf life, but are also often modified to maximise flavour, visual appeal, texture, odour and the speed with which they are digested.

These foods are made by deconstructing natural food into its chemical constituents, modifying them and recombining them into new forms that bear little resemblance to anything found in nature. So radically are they altered that nutrition scientists have given them a new name: ultra-processed.

Ultra-processed foods are often designed to directly target the vulnerabilities of the human brain — in particular, to exploit the way the brain processes pleasurable sensations. They often deliver a signal to the brain’s reward centers so quick and potent, some neuroscientists believe, that many people find it as addictive as opioids or nicotine.

Lab-made creations such as chips, hot dogs, enriched bagels and American cheese have been a staple of the American diet since the 1980s. In recent years, however, the varieties of these foods have multiplied on store shelves and in fast-food restaurants. In 2017 and 2018, they accounted for 57 percent of the calories consumed by the average American — up from 54 percent in 2001 and 2002, according to one study.

“We’ve gotten really good at stripping out and refining and processing sugars and fats into these really potent vehicles, and they’ve gotten cheaper to make,” says Ashley Gearhardt, a psychology professor at the University of Michigan who studies food and addiction.

“Then we combine them into totally novel food products that are so much more rewarding than anything our brains ever evolved to handle. That’s why so many of us can’t stop eating them.”

The implications are worrisome. Half of American adults now have diabetes or pre-diabetes, three quarters of adults are overweight and about 100 million, or 42 percent, are obese, by the standards of the Centers for Disease Control and Prevention (CDC). Among children between 2 and 5 years old, one in 10 are already obese. Among teens, that number is one in five.

Our food, in other words, is literally killing us. Food companies have tricked our brains into making us complicit, and our elected officials are complicit, too.

What’s needed is a better understanding of exactly how processed foods make us sick and a public reckoning with Big Food’s role in the nation’s health crisis. So far, policymakers have shown little appetite for scrutinizing the tactics of the powerful food lobby, but the pressure to curb consumption of ultra-processed foods is growing.

The nation’s food crisis seems to be playing out in ways eerily reminiscent of the early days of tobacco smoking more than half a century ago, before regulators caught up with Big Tobacco. (It’s no coincidence that many tobacco companies later acquired food companies.) This time, it’s Big Food peddling harmful and possibly addictive products.

“We have now the accumulated evidence, particularly in the last five years, that people who eat more ultra-processed foods have higher risk of obesity, diabetes, cardiovascular diseases, depression, cancer, renal and liver diseases,” says Marion Nestle, a professor emerita of nutrition, food studies and public health at New York University. “The studies have been overwhelming. There’ve been hundreds and hundreds of them. There’s no doubt that this is not a good thing. It is a problem.”

A few years ago, Kevin Hall set out to debunk the theory, espoused by a growing number of nutritionists, that Americans were getting fatter and sicker because of the complex industrial and chemical processing that food companies were using to make their products appealing.

Hall believed the explanation had more to do with Americans simply eating too many calories, fats and sugars. The notion that extra processing might be causing the problem struck him as “ridiculous.”

To prove it, Hall, who runs a research laboratory that studies the regulation of metabolism and body weight at the US National Institutes of Health (NIH), ran a controlled experiment that he thought would show beyond a doubt that processing wasn’t as important as nutrients.

He paid 20 volunteers $5,000 apiece to move into an NIH facility in Bethesda, Maryland, for one month. He divided the volunteers into two groups. One ate mainly healthy food derived from simple ingredients with minimal processing, such as Greek yogurt, beef tender roast and shrimp scampi with spaghetti. The other group ate Honey Nut Cheerios, Chef Boyardee beef ravioli, Eggo pancakes and other processed foods — the kind most overweight people in America eat.

Hall and his colleagues did their best to ensure that the only significant difference between the two groups was in how much processed food they consumed. Each group ate diets that were nutritionally identical in every way Hall and his team could think of, containing the same amounts of sugar, salt, fat, fibre, macronutrients, carbohydrates and calories. Both groups of volunteers were allowed to eat as much as they wanted. After they finished a meal, their leftovers were carried down a couple floors and delivered to a team of nutritionists in a laboratory, who precisely weighed and characterized everything left on the plate.

Hall, it turns out, had it all wrong — processing, in fact, made all the difference. The subjects in Hall’s study who subsisted on Cheerios and Chef Boyardee gained one pound per week on average and consumed in excess of 500 calories a day more than the group with the healthier diet. What’s more, when they later switched to a natural diet, they dropped the extra weight.

The conclusion: whatever food company chemists are doing to food, it makes people fatter.

The results opened up a new avenue of inquiry for Hall and his colleagues. What was it about the ultra-processed food that prompted this overindulgence and weight gain? The question is a matter of intense speculation and debate in the world of nutrition science — a debate that can only be solved with more research. What’s clear, however, is that the ultra-processed foods favoured by a vast proportion of Americans are causing harm.

Humans have been modifying food since hunter-gathers discovered fire and figured out how to barbeque stone-age animals. Ten thousand years ago, ancient Mesopotamians and Egyptians learned how to smoke, salt and dry their food to preserve it. In the 19th century, pasteurization and canning techniques vastly expanded the capacity for long-term storage and transport of food.

Processed food, as we know it today, arrived in the first half of the 20th century. That’s when food engineers figured out how to use modified potato starch to form pork, ham, sugar, water and sodium nitrate into a pliable gelatinous blob that would fit into a rectangular tin emblazoned with the word “Spam.”

Two World Wars, the Space Race and increasing consumer demand for fast meals with a long shelf life that could support the lifestyle of the expanding middle class financed the scientific efforts necessary to give us spray drying, evaporation, freeze-drying and a sophisticated understanding of how to make a decent tasting cupcake you can put on a shelf and still eat two years later.

By the early 2000s, Americans were getting more than half of their calories from chicken nuggets, artificially sweetened canned food, potato chips and other man-made concoctions.

Nutritionists didn’t create a language to describe this trend until 2009. That year, Carlos A Monteiro, a lanky, curly-haired professor of nutrition at the University of Sao Paulo, introduced the “NOVA Food Classification system,” a novel grouping of foods based not on their nutritional content but according to the extent and purpose of the physical, biological and chemical processes applied to them after they were separated from nature.

He coined the term “ultra-processed,” (as opposed to “minimally processed” or simply “processed”) to refer to “industrial formulations made entirely or mostly from substances extracted from foods (oils, fats, sugar, starch and proteins), derived from food constituents (hydrogenated fats and modified starch), or synthesized in laboratories from food substrates or other organic sources (such as flavour enhancers, colours and food additives used to make the product hyper-palatable).

Monteira excluded foods that had been exposed to simple processes like drying, fermentation, pasteurization or other processes that might subtract part of the food (frozen vegetables, dried pasta or eggs).

He also carved out exceptions for products manufactured by industry with the use of salt, sugar, oil or other substances added to natural or minimally processed foods to preserve or to make them more palatable, but that could still be recognised as versions of the original foods — usually foods that had just two or three ingredients (such as beef jerky, or freshly made bread).

Ultra-processed food, by contrast, was meant to include Frankenstein-like creations that were often made up of added sugar, salt, fat and starches extracted from natural occurring foods and then blended with artificial colours, flavours and stabilisers to hold it all together. Soft drinks, hot dogs, cold cuts, packaged cookies and salty snacks like pretzel rods all qualified, as did many frozen dinners and canned entrees.