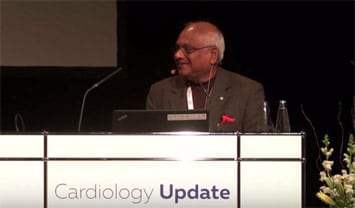 One of the world’s most regarded heart disease experts, cardiologist Dr Salim Yusuf, President of the World Heart Federation, has recently delivered a talk at a Zurich cardiology conference, outlining how his research finds fat is not harmful, even beneficial, while the high carb diet recommended worldwide is the ‘worst thing’ for CVD.

Dr Yusuf is one of the world’s most influential cardiologists – with a DPhil, FRCPC, FRSC and OC, behind his name, and Professor of Medicine at McMaster University in Canada ahead of it.

Says LCHF expert, Sweden’s Dr Andreas Eenfeldt on the talk: “Get ready for action, with this new attention-grabbing talk by the president of the World Heart Federation, Professor Salim Yusuf.

“Here are just a few of the controversial, but likely correct, quotes:

“Yusuf also gets into the mistaken war on salt, where a moderate amount of sodium (3-5 grams per day) may be optimal.

“It’s an excellent talk, if you can stand the slight over-reliance on observational data at some points (it normally does not prove cause and effect). Still, highly recommended!”

View/hear the President of the World Heart Federation’s talk here….

CVD burden in US expanding faster than expected

The growth in cardiovascular disease has outpaced expectations, reaching a prevalence of 41.5% in 2015 – 15 years ahead of schedule, according to a report from the American Heart Association (AHA).

The “disturbing” update to its 2011 projections likely reflected worse-than-anticipated effects of rising obesity and earlier type 2 diabetes onset across the country, AHA President Steven Houser, PhD, said in a teleconference with the press….