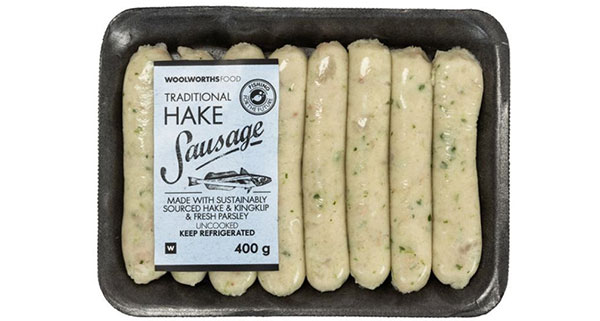 Created by supplier In2food, Woolworths says that the launch of the product was promoted by a growing demand for meat alternatives.

“We’re seeing a more considered approach to animal protein. People are eating less of it and when they do eat it they want to make it count. We have seen a growing number of consumers eating seafood and it will continue to become more pronounced in the years to come as consumers are actively making healthier choices for themselves and the planet,” says a spokesperson.

“When we launched our trout rashers (an alternative to bacon), we saw customers react to it positively and we knew that this is a space that needed to be explored further.”

The Traditional Hake Sausage launched in stores on 27 September 2021 and retails for R99. It features flavours of fresh lemon, garlic and parsley.

The Trout Sausage has been flavoured with lemon and fresh dill while the Haddock Cheese Sausage variant includes paprika and spring onion.

Woolworths adds that it plans to launch other hake products.

“We have launched a hake chipolata in the ready-to-eat category, a great snacking alternative, as well as a battered hake fillet which plays on the traditional hake and chips.”

The new product range has the country divided on whether they are for or against the fish wors. Several hilarious tweets promoted the product to go viral on social media. Some thought that the retailer ‘cod’ do better and that it may be the ‘wors’ idea yet.