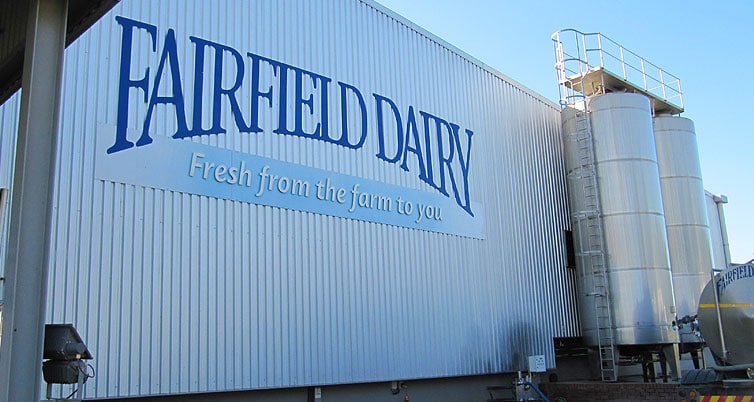 Woodlands Dairy, one of the country’s largest milk processors, has signed a significant deal with KZN’s Fairfield Dairy that will see the two major agri-processors effect a full merger over the next five years.

The Competition Tribunal announced its conditional approval of the merger between the Humansdorp operation and the Howick firm recently.

The conditions are applicable to the fulfilment of a series of share purchase tranches which will make up the staggered acquisition. Employees’ jobs are also protected as part of the merger conditions.

For Woodlands, the deal will allow it to ramp up its value-added products business through Fairfield’s facilities, while delivering on its strategic objectives which include expanding its basket of products.

“I was looking for an opportunity to expand our business with particular interest in growing our value-added products portfolio. “I engaged an agent to explore two prospective companies and it became apparent that Fairfield Dairy was on the market,” Gutsche said.

“Kevin Lang, the majority owner, indicated his willingness to sell to us and we structured a deal whereby we will acquire 100% of the shares of his company over a five-year period.

“This enables us to learn about his business from him over a period. The first tranche will buy us 40% of the company.

“Within two years thereafter we must exercise our right to acquire a majority share in Fairfield.”

Gutsche said he was not at liberty to disclose the value of the deal.

Acknowledging that Woodlands shared some key customers with Fairfield, he said the two businesses were a great fit in that Fairfield would complement Woodlands’ range of products and so would enhance the company’s product range and customer offering.

Gutsche framed the deal as a matter of quality over quantity.

Questioned about the effect the deal would have on Woodlands’ national footprint, Gutsche said he did not foresee any significant difference from a distribution perspective.

“Woodlands Dairy already has national cover as does Fairfield as they distribute into the DCs (distribution centres) of national retail structures, so I don’t see a big difference ensuing regarding distribution,” he said.

“A major aspect for us will be to be able to contract-pack First Choice [Woodlands’ brand] value- added products at the Fairfield facility that we currently don’t manufacture in Humansdorp.

“Obviously our penetration into the KwaZulu-Natal region will be enhanced through this acquisition.”

Gutsche said each business would continue to run independently and under its own name.

“There will be no changes to management structures in the foreseeable future.

“We will have two positions on the board initially which will enable us to learn the business first-hand and also influence strategic direction,” he said.

“We are extremely excited about the deal, which makes absolute sense to our strategic plans to be a more complete dairy company, supplying a full range of dairy products to the market.”

KEVIN Lang, founder of Fairfield Dairy, has long punched above his weight in the South African dairy industry.

He’s highly regarded on both sides of the supply chain: on the farming side, he’s renowned for his progressive farming strategies and involvement in breeding champion Ayrshire and Holstein cows; and in secondary production, he’s developed a small family farm into one of the foremost independent dairies in South Africa that’s a major private label supplier to leading retailers.

Together with one of his key customers, Woolworths, he’s also pioneered the quality milk marque that now rests in the brand name, Ayrshire.

Quality is such a commercial cliché, but its use is unavoidable when talking about Fairfield, as it has long been the driving ethos of this business that has grown multifold since 1991 when Lang and wife, Shannon, started milking cows to supplement their vegetable enterprise on their 350ha farm in Curry’s Post in the beautiful KZN Midlands.

The proof of the pudding, to coin another cliché, is in Fairfield’s prominence in every National Dairy Championship in recent years, as well as several Qualité awards, and the fact that it’s a major private label supplier of milk and a long list of milk and value-added dairy products to SPAR, Pick ‘n Pay and Woolworths.

Interestingly, too, Lang was the first dairyman to introduce rBST hormone-free milk to South African consumers that, rightly or wrongly, is now widely perceived by the global public to be a better and healthier choice.

The Fairfield story has been one of sure-and-steady growth, with a few big steps in between: a major expansion on the farm dairy in 1998 and diversification into value-added products; in 2004 it moved from a family business to a company, bringing in Bruce Fly, the current MD, and Barry Glanz, the ops director, as new shareholders; and in 2006, it took a R50-million-plus leap into its new greenfield factory, with the first commercial products coming off the line in September.

The APV-designed and built plant handles yoghurt and dairy-based desserts, and was primarily prompted by the ongoing retail boom and, notably, by Woolworths’ dramatic national expansion and its need to appoint a second supplier of yoghurts and desserts.

‘The growth in dairy consumption, particularly yoghurt, has been nothing short of phenomenal in recent years,’ comments MD Bruce Fly. ‘We had reached capacity at the farm dairy and realised we had to do something – thus we undertook this major investment with the added affirmation of Woolworths and its commitment to us as a new supplier of value-added products.’

Stylish is not often a word associated with factories of old, but Fairfield’s new premise on a spacious 2,5ha is deserving of this adjective.

It’s exterior, too, in no way belies its hi-tech, 5 000m² interior, as Barry Glanz comments: ‘We’re very proud of it – it’s an exceptional, world-class, super-hygienic facility and arguably the most modern in the country. It’s highly automated and from milk reception to finished yoghurt ready for packing only requires the attention of six people per shift.’ [See sidebar for more on the dairy].

Woolworths has split the supply channel from its two yoghurt suppliers not regionally, but according to product lines, with Fairfield responsible for a range of smoothies, plain and layered yoghurts, drinking yoghurts and desserts.

‘These high-value products are novel for us and we’re excited to be venturing into new territory – and it has certainly piqued the interest of our product development team,’ says Fly, in reference to the new short life/fresh dessert lines.

While its primary focus is unquestionably on the well-being of its three key accounts, the new plant has also opened the opportunity for Fairfield to grow its own brand and achieve more ambitious and wider distribution than just its home province: ‘We’ve built a strong reputation with KZN consumers – I think we’re seen as a brand of integrity, of “earthy” and authentic value and quality – and we’re very optimistic that we can leverage this in other regions,’ Fly notes.

There’s that ‘quality’ word again, and Glanz expands on what’s inherent in the Fairfield offer: ‘We purchase and pay a premium for milk of the highest quality, the bulk which is sourced from the KZN Midlands, mainly the Nottingham Road/Karkloof areas.

‘Our suppliers are committed to rBST-free milk and are compliant with strict feeding measures, eg no animal by-products, antibiotics, and so on, in the feed rations.

‘We have min/max standards to which the raw milk must comply and pay a premium based on low somatic cell counts, low total bacteria counts and higher levels of butterfat and protein,’ he says.

Glanz adds that Fairfield incubates its yoghurt for what is termed in the trade as a ‘long set’, or 12 hours, to produce what they believe is a superior product, and today the company sits resolutely along a minority of dairy producers who add real fruit – not merely flavour as is the contemporary cost-cutting trend – to their yoghurt.

Boosting its own brand will also give Fairfield some room to manoeuvre in a market that’s largely commoditised and where margins are tight and under relentless competitive pressure, as Fly elucidates: ‘Dairy is a very cut-throat industry, and it’s not easy to keep your standards up there when retailers and consumers alike are easily swayed by a few cents’ difference, even if it’s for a inferior product.

‘No-one is excited by a commodity and we believe there’s lots of scope to enter new markets, to entrench our brand as a top-notch but good value buy, as well as to grow through innovation and differentiation.

‘We have a big investment to pay off, but we think our friendly bank manager shares our confidence,’ he concludes wryly.