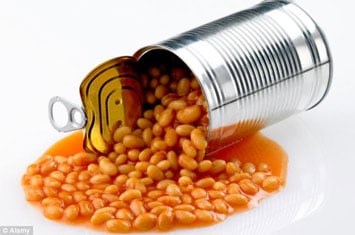 BPA, or bisphenol A, is a controversy-mired industrial chemical used to make plastics and resins which are often used in containers that store food and beverages. So, should you worry if its used in your food cans? For complex decisions such as whether to use BPA, a risk-and-benefit analysis can often shed light. In the case of BPA, the benefits are clearer than the risks.

Most metal food and beverage cans have a thin interior coating that contains BPA. This coating protects the can from corrosion, and as a result, prevents contamination from dissolved metals or life-threatening bacteria. We can probably all agree that nobody is hoping for a side of botulism with their holiday meal.

BPA is also an endocrine disruptive chemical (EDC), which can cause adverse health effects by interfering with how our normal hormone systems work, either by mimicking natural hormones or by altering their production or breakdown.

Some research has shown that BPA can seep into food or beverages from containers that are made with BPA. You may have seen many products touting that they are BPA-free.

As a professor in food science and human nutrition, I recognise the long-held belief that the presence of certain additives in our foods can greatly affect the safety of our foods. There is no question we need to develope the best possible scientific methods to assess whether these chemicals can cause adverse health effects.

Others and I have tried to do just that. In fact, I was a coauthor of a report on the outcome of a workshop where more than 240 scientists gathered in April 2013 to analyse data generated by the US EPA’s Endocrine Disruptor Screening Program.

These scientists came from government, industry, academia and nonprofit organizations to collect the insights of multiple stakeholders who were involved in testing the effects of EDCs.

So, should you worry? Let’s investigate….

An industrial chemical at your dinner?

When considering the safety of any substance, however, it is important to understand what is known as a “dose-response relationship.”

Generally speaking, this concept refers to the fact that as the dose of a potentially harmful chemical we are exposed to increases, so, too, does the severity of the harmful response.

This means the relative safety of almost every substance – even water or oxygen – is a function of the dose to which we are exposed. Importantly, this also means that the mere presence of a chemical does not mean it will be harmful.

In the US, the FDA regulates food contact chemicals using a risk-based approach, which takes into account the actual exposure conditions under which a chemical causes harm.

For every chemical, however harmful it may be at high doses, there becomes a dose level that is so low that there will not be a harmful response in a living organism. In the world of risk assessment, that point is called the No Observed Adverse Effect Level (NOAEL).

The FDA’s conclusion about BPA came in the fall of 2014, after it had completed a four-year review of more than 300 scientific studies. The existing NOAEL for BPA in food packaging was 0.0005 grams per kilograms of body weight, per day, which the review supported.

Because of the uncertainty associated with BPA, the FDA added some additional conservatism to lower the “margin of exposure” by another 1,000-fold to 0.000005 grams per kilogram of body weight per day. The FDA considers this standard to be sufficiently protective.

The agency declared that the available information continues to support the safety of BPA for the currently approved uses in food containers and packaging. The FDA, however, did amend its regulations to prohibit the use of BPA-based materials in baby bottles, sippy cups and infant formula packaging.

The importance of the FDA integrating the additional conservatism into a safe “margin of exposure” was reinforced in some recent scientific publications, which highlighted the possibility for unusual effects at low doses of BPA .

Given the uncertainty of the current scientific debate, several leading scientific organisations in the US have launched a research program to study the effects of BPA on all of the potential target organs associated with suspected sensitivity to this chemical.

The study will involve 12 academic investigators with the necessary experience to study the effects of BPA, and the core part of this study is being done at the FDA National Center for Toxicological Research according to the most rigorous study guidelines.

The CLARITY-BPA (Consortium Linking Academic and Regulatory Insights on BPA Toxicity) Study will provide the most robust assessment, and hopefully greater “clarity” about the toxicity associated with BPA, including the possibility for unusual effects at low doses of BPA.

Fewer than 64 cans of beans per day, and you’re OK

Hundreds of scientific papers have been written to address the potential impacts of EDCs, including BPA. Because the studies vary greatly in their findings, and because key results have proven difficult to consistently reproduce, there is still uncertainty about the impacts of EDCs.

OK, I know what you’re thinking. If the scientists can’t agree, and the CLARITY-BPA study is still underway, why shouldn’t we just take steps to eliminate the presence of all EDCs in our environment, including BPA?

That’s a good question, but there are some important considerations.

First, as noted above, BPA has played a very important role in food safety, as a lining in canned goods – think about protection against heavy metal contamination and against microbial contamination (eg botulism).

Second, replacing BPA can be complicated. Although concerns have been raised about the use of BPA, there is no question that it has been extensively studied – in fact, it is one of the most studied chemicals.

As noted in a recent report, “BPA-based epoxy is being replaced with ‘regrettable substitutions’ in that there is very little data in the published scientific literature for BPA replacements, and the data is not publicly available from the FDA.”

The safety profile of BPA is known. We know very little about the safety for these substitutes.

Finally, let’s look at an actual report that tested products for the presence of BPA from grocery store outlets in four states. As only a single number was provided for each product in each state, I decided to use the highest amount of BPA for three products that was reported in parts per billion (ppb): cream of mushroom soup – 83 ppb; green beans – 18 ppb; and turkey gravy – 125 ppb. To put “ppb” into context, think one inch in 16,000 miles, or one minute in two thousand years.

Based on the conservative “margin of exposure” determined by the FDA, as highlighted above, and on the levels of BPA reported above, a 70 kg person would have to consume over 14 cans of cream of mushroom soup, or over 64 cans of green beans per day, or over nine cans of turkey gravy per day to be vulnerable to adverse health effects associated with exposure to BPA.

In short, you are far more likely to experience potential adverse health consequences by failing to eat in moderation than you are by consuming the extremely small concentrations of BPA found in canned foods.