08 Dec 16 Why investors are hungry for Famous Brands 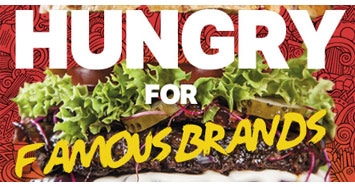 No other fast-food operation in SA has the number and variety of franchises as Famous Brands, whose market value grew 150-fold to R15bn on CEO Kevin Hedderwick’s watch. As rivalry in the sector heats up, the group — now led by Darren Hele — has branched out into the premium luxury segment. Is this a wise move as SA’s appetite for fast food grows?

If Pac-Man could manifest itself as a corporate behemoth, it would be Famous Brands — the insatiable franchise food group that has been gobbling up rivals as if there were no tomorrow.

Rather like rival Spur, Famous Brands has for years been the guilty pleasure of millions of South Africans, who have flocked to its numerous restaurants.

Name the brands, and you’ll have been to one of them: Steers, Europa, Debonairs Pizza, Milky Lane or Fishaways. (Who hasn’t had a breakfast at Wimpy, or been dragged to the Milky Lane by eager children?)

It’s a strategy which, until recently, was driven by Kevin Hedderwick, now 64. It has produced fat returns for its investors too: if you’d put R10,000 into buying its shares in 1994 when it listed, you’d be R1.8m richer now. And that’s excluding dividends.

As this shows, there’s big money in fast food: R32.9bn last year, to be precise, according to research agency Euromonitor. And that was 8% up from the previous year.

Hedderwick, who started his career at Distell, has handed the reins to Darren Hele after a 15-year stint during which Famous Brands’ market value climbed from R105m (R1.69/share) to R15,4bn (R158/share).

The secret has been stealthily buying underappreciated outlets and giving them sizzle. But this year, something changed in Famous Brands’ Midrand headquarters.

Most notably, it splurged R2.1bn — the largest deal in its history — to buy the 15-year-old Gourmet Burger Kitchen (GBK) in Britain, from a company owned by the Enthovens, the SA family who founded Hollard and own Nando’s in the UK.

GBK, with 78 restaurants in the UK and five in Ireland, has made waves as leader of the “posh patties” burger trend in the UK.

Hedderwick describes the GBK deal as a game-changer, as significant as the 2003 purchase of Wimpy in SA for R125m (when Famous Brands’ market value was R80m).

But the UK purchase also signals a step change in thinking. Until now, Famous Brands has stuck to lower-key purchases — in stark contrast to the glittering deals of its up-and-coming competitor, Taste Holdings.

Taste is led by 42-year-old Carlos Gonzaga, himself a former franchisee of Famous Brands’ Debonairs Pizza — a complication which has led to no small degree of bad blood between the two companies.

…. At the core of the issue is whether the market is big enough for everyone. In other words, is SA growing as a fast-food nation?

It’s difficult to gauge because companies don’t share their data. But Famous Brands, using All Media Products Survey (Amps) and its own study called “The hunger games”, says the overall pie is growing.

A decade ago, the Amps data showed 68%-70% of people went to a restaurant or bought fast food. Today it’s around 82%.

Hedderwick says: “In terms of the food service space, there is no question about it: it is a significant growth category. Because it’s all about convenience, it’s all about double-income families, it’s about people being cash-rich and time-poor.”

Meal times, he adds, have become blurred. Convenience is now a priority.

Compared to other countries, it would also seem there is scope for growth in SA. In some developed economies and rapidly emerging countries like India, about 80% of all meals are bought or consumed outside the home. In China, 59% of people eat fast-food weekly.

“But we have to make sure we’re fit for purpose every day. I came out of SAB where, at one stage, we had 97% market share and people used to call us a monopoly. But the late, great Graham Mackay drummed into our heads that we were simply ‘a temporary sole supplier’, which meant we had to be sharp every day of the week.”

Having said that, Famous Brands, Taste, Spur and Grand Parade are all hostage to the wider economy, which won’t break even 1% growth this year. Once that improves, the food companies could be in for a serious lift……

How Kevin Hedderwick built a colossus