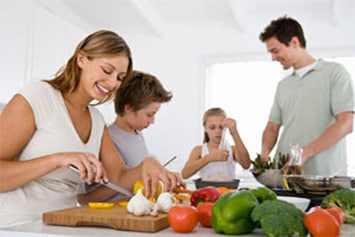 A scientific experiment has tackled an eternal question nagging city dwellers and busy parents: Cook, or order takeout? Taste tests showed that when it comes to healthy food, people like their own preparation better than the same recipe ready-made.

“The mere act of preparing foods leads to higher likings because people overvalue objects that they have put effort in,” say a team of European researchers in a paper published earlier this year in Health Psychology.

Their findings underscore what other researchers dub the “IKEA effect”, a reference to the Swedish company that sells assemble-it-yourself furniture.

“When people prepare things—if they build, for example, a cupboard—people like it more,” says Simone Dohle of the University of Cologne.

Half of the participants tasted a low-calorie smoothie made from raspberries, milk and sugar. Some measured and blended it themselves, while others tasted one the researchers made ahead of time.

Those who had to mix their own rated the raspberry smoothie higher on a scale from “do not like at all” to “like very much” than those who drank it pre-made. They also estimated that it was healthier and had fewer calories.

“Psychologists explain this as ‘justification of effort’ because participants have put all this effort into making a milkshake,” says Dohle.

The effect was particularly pronounced for those women who said they were on diets or had other dietary restraints, the researchers found.

In contrast, the other half of participants tasted a high-calorie milkshake of chocolate ice cream, milk and cream, which they either mixed themselves or received already prepared.

Those who made the chocolate milkshake on their own rated it worse than those who drank the prepared version—evidence that people are turned off when they know exactly how much in the way of unhealthy ingredients is in their food, the researchers wrote.

The study lends credence to the avalanche of advice in countries with rising rates of obesity that people should cook at home more. It also shows that when people cook at home, they are more likely to lean toward healthier recipes.

“There’s this second process: If you prepare something, you become more aware of all of the ingredients you put into your food,” Dohle says. “Food preparation could be a way to foster healthy eating habits.”