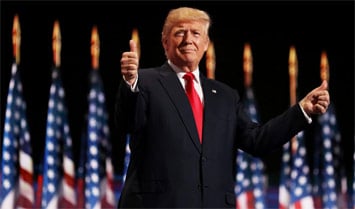 Donald Trump has pledged that his presidency will unify and “make America great again” but his plans for the food industry remain unclear for the most part.

Apart from issuing a hard-hitting statement – afterwards retracted – about wanting to abolish the FDA’s “food police” with their “inspection overkill” his priorities for the food industry were seldom mentioned during his election campaign.

Prior to his swearing in as American’s 45th president, some industry stakeholders had already speculated what a Trump presidency would mean for the food industry, but most remained quiet.

On the face of it, a Trump presidency should be a positive for big food corporates as, unlike his predecessor president Obama, Trump is expected to peel away legislation and regulations, which he has described as burdens on industry.

On the flip side, campaigning group Center for Science in the Public Interest (CSPI), said the Trump presidency was “shaping up to be a nightmare” while some farmers have expressed concern that Trump’s negative sentiment towards China will lead to worsening trade relations and put exports at risk.

While Trump’s priorities will become apparent over the coming days, behind the scenes Trump has begun making key appointments in the sector, as well as meeting industry luminaries, though it is far too early to call on whether he will prove to be a friend or foe to the food industry.

Trump has met Werner Baumann, Bayer CEO, and Hugh Grant, Monsanto chairman, the heads of the two companies who have thrashed out a $66bn deal to become one of the world’s biggest agrochemical giants.

The two companies described the meeting with Trump as “very productive” and that Trump and his team shared “their view on the future of the agriculture industry and its need for innovation.”

With a handful of big mergers currently occurring in the agrochemical industry, shareholders and executives backing those deals will hope that Trump will preside over a light-touch regulatory system.

This past week Trump named the former Georgia governor, Sonny Perdue, who served on Trump’s agricultural advisory committee during his presidential campaign, as his nominee for secretary of agriculture.

Trade is fundamental to the US farm economy: US farm and food exports to China were more than $20-billion in 2015, according to Reuters.

However, some have been concerned about Trump’s anti-China rhetoric during the campaign, which they argue could harm trade.

However, the appointment of Perdue appears to have been well received.

Questions will be raised about what kind of food and agricultural policies the US can expect from Trump and how major proposed trade agreements such as the Transatlantic Trade and Investment Partnership (TTIP) will fare under his presidency.

Questions about the Republican party’s platform on issues like genetically modified food, improvements in food labeling, the numerous proposed sugar levies across the US, sustainability and environmental issues like climate change will be abundant – especially as in the past Trump has severely criticised climate change policies…..