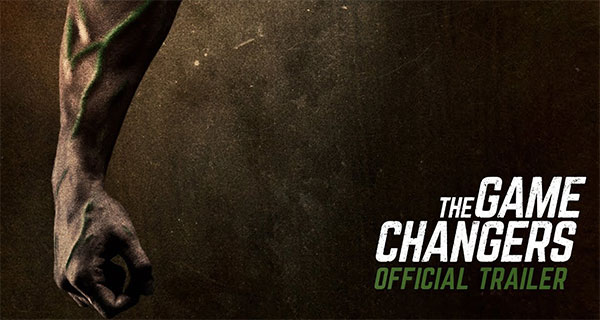 The Game Changers is an extraordinary new movie, a “diet documentary” that is making scientific waves worldwide. Not everyone’s impressed…

It is extraordinary because it is headed by, of all people, Academy Award-winning film director James Cameron. Yes, he of blockbuster Titanic fame.

It can appear extraordinary that Cameron chose to be involved as executive producer in this type of movie (it’s available livestreamed on Netflix). But what’s really extraordinary is that this isn’t a diet documentary.

It’s just another vegan-animal-rights propaganda movie in a long line of them. Think Forks Over Knives in 2011, Cowspiracy in 2014 and the most egregious vegan hype of all,What The Health, in 2017.

The Game Changers can claim to be a game changer on that score.

It can also seem extraordinary that Cameron could corral so many well-known names — Hollywood stars (fading), elite athletes, even a Formula One champion — to put their names, reputations and money to this movie.

Among executive producers are Arnold Schwarzenegger, Jackie Chan, Lewis Hamilton, Novak Djokovic, Serena Williams and Chris Paul. (If you haven’t heard of Paul, you’re not a fan of American basketball.)

Publicity material calls the film a “shocking new documentary that will change the way you view meat”. It claims to mix “shocking, ground-breaking science with cinematic stories of struggle and triumph”. It also claims to be “different” because it is “not haughty or preachy” but rather “informative and eye-opening” and “fuelled by the truth”.

The film is slick in presentation and has fans. It has also precipitated a flood of criticism from top nutrition scientists, medical doctors and dietitians worldwide for its lack of scientific balance, the chronic weakness of the science it does present and its wild claims.

One of the biggest problems with this film is that it does what all its vegan predecessors have done: it relies on emotion and cherry-picked epidemiology.

Epidemiological research is well-known — or should be by now — as the weakest form of evidence to use when making scientific argument because it can only show association, not causation.

Cameron does the film no favours by not declaring his significant conflict of interest upfront. He and wife Suzy — vegans since 2012 — founded the vegan food company Verdient Foods in September 2017. They recently invested $140m in a joint venture with US-based refiner Ingredion to expand its range of plant-based protein “solutions”.

Hamilton might have mentioned that he is a major backer of Neat Burger, a  fast-food restaurant chain that launched in London recently.

Schwarzenegger’s contribution is an eye-opener but only for its ignorance and dishonesty. The former champion bodybuilder-turned Hollywood actor and politician built his spectacular physique at the peak of his career on a diet of animal foods, which he talks about.

And steroids too, which he doesn’t talk about. In 2005, Schwarzenegger unapologetically admitted to taking steroids to build his bulk.

He now claims the health benefits of meat are from nothing more than “marketing”.

The basic premise of this film is twofold: that plant-based, vegan diets are optimum for sports performance; and that meat kills — humans and the planet.

Spoiler alert: robust science does not support those claims….