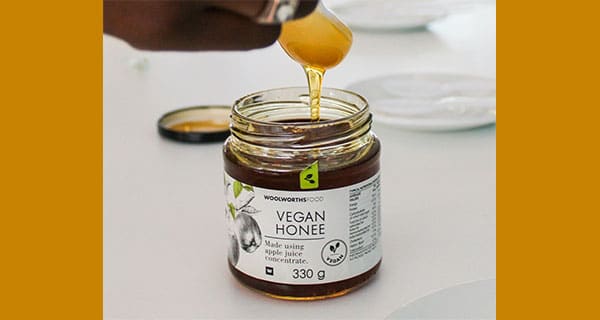 Woolworths has introduced a vegan “honee”, an animal-friendly alternative to honey.

Made from concentrated apple juice instead of ‘bee spit’, the new product was due to be available in 100 stores from 16 September.

The honee is made by Herbivore, a husband-and-wife team in Cape Town that also supplies Woolworths with kale chips, mushroom biltong, and date balls.

Finding an alternative to honey, which is essentially bee spit, was next on the agenda, said Herbivore’s Chanel Grantham.

“Honey is essentially a food source for the bees,” said Grantham. “The population of bees is declining and yet the demand for honey is going up we’re giving people an alternative.”

Bees store nectar in an extra stomach, where it mixes with enzymes. When they return to the hive, they regurgitate the nectar into the mouth of another bee, a process that continues until honey is finally deposited into honeycomb.

To see if honee could pass for the real thing, Business Insider South Africa conducted a blind taste test with 10 sweet-toothed journalists.

The overwhelming reaction from our tasters was that the honee was too sweet and tasted somewhat like apricot jam.

“It’s sweet. It tastes like a toffee syrup, but also with a hint of apricot jam,” said one participant.

Other participants said it has a “sharp, sour taste”.