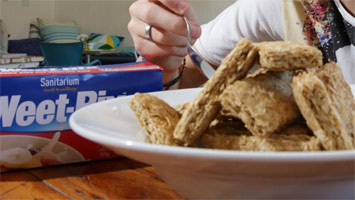 US company Post Holdings is buying Weetabix from China’s Bright Food Group for £1.4bn, putting the British breakfast favourite back into the hands of a cereal company.

Post said the combination would help its own brands, which include Honey Bunches of Oats and Grape-Nuts, to expand overseas, while allowing for greater distribution of Weetabix and its Barbara’s brand in North America.

The sale comes just five years after Chinese state-owned Bright Food took control of Weetabix in a deal that valued it at £1.2bn at the time of a major overseas push stretching from Australia to Israel.

The brand has struggled to grow significantly since as cold cereals in western markets face more competition from breakfast bars, Greek yoghurts and fast-food chains.

Concerns over the sugar content of some cereals has also hit sales of such products.

The Weetabix brand had global retail sales of $310m in 2016, according to Euromonitor International, up only 1.4% from 2012, the year in which Bright Food took control.

In China, which had been key to Bright Food’s purchase, retail sales of cold cereal have nearly doubled over the past five years, but it remains a relatively small category, worth just $933m, according to Euromonitor, as most locals prefer hot breakfasts.

“It’s probably going to be a much better fit with Post,” said Liberum analyst Robert Waldschmidt, noting that there would be cost savings and that the brand should benefit from being owned by a company with particular expertise in cereal.


For Bright Food, which makes dairy products, candy and other foodstuffs, the sale did not signal the end of its international ambitions, said Bright spokesman Pan Jianjun, who is based in Shanghai.

“This is a part of our internationalisation strategy. Selling assets enables us to expand better. Going forward Bright will stick to our overseas push,” he said.

The sale of Weetabix would give Bright extra firepower should it want to bid for any other food assets on the block. The global packaged food industry is in the midst of a wave of dealmaking, with giants Unilever and Reckitt Benckiser both selling multibillion-dollar food assets.

Bright Food took control of Weetabix from private equity firm Lion Capital, which had held its stake for over a decade.

The latest sale price, £1.4bn, is about 11.6 times the £120m of adjusted annual ebitda (earnings before interest, tax, depreciation and amortisation) that Post said Weetabix would contribute before cost savings. It estimates those savings to reach £20m per year by the third full fiscal year after the deal is completed.

Post, headquartered in StLouis, the US, said the deal would immediately add to its adjusted operating profit margins and its free cash flow, excluding one-time transaction expenses. The company expects to fund the deal with cash on hand and borrowings under its existing credit facility.

Post Holdings has moreover agreed in principle to establish a joint venture with Bright Food and Baring to manage the Weetabix China operations.

It said it still expected 2017 adjusted ebitda of $920m-$950m, excluding any contribution from Weetabix.

While it’s true that Western eating habits have caught on in China the breakfast category has proved a tough segment to tamper with….