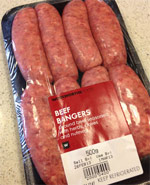 The American meat industry is rolling out a refresh of the often confusing 40-year-old system used for naming the various cuts of beef, pork, lamb and veal. That’s because the system — the Uniform Retail Meat Identification Standards, or URMIS — was designed more for the needs of retailers and butchers than for the convenience of shoppers.

The bottom line is that meat counter confusion isn’t good for sales. So after nearly two years of consumer research, the National Pork Board, the Beef Checkoff Program and federal agriculture officials have signed off on an updated labeling system that should hit stores just in time for prime summer grilling season.

In all, more than 350 cuts of pork and beef (veal and lamb updates are coming later) will sport the new labels, which will include not only simplified names, but also detailed characteristics of the meat and cooking guidelines. So what once was called pork butt — and actually does not come from the pig’s nether region — now will be called a Boston roast and will be described as a bone-in pork shoulder.

“The problem is consumers didn’t really understand the names that were being used, and still don’t,” said Patrick Fleming, director of retail marketing for the Pork Board. “The names confused consumers to the point where they’d go, ‘You know, the information doesn’t help me know how to use it, so I’m going to stop using it.’ That was a wake-up call for both the beef industry and pork industry.”

The change comes while America is at a culinary crossroad. Interest in food as entertainment is at an all-time high, but knowledge of food and cooking has ebbed. Farmers markets are booming, but so is the processed food industry. Still, more people are asking more questions about their food, and the massive meat industry (pork and beef alone account for nearly $40 billion in annual retail sales) is hoping to answer them.

Meat labels are federally regulated. And though the URMIS system is a voluntary one, nearly 85 percent of food retailers use it. Those who don’t must use either alternative federally approved labels, or submit their own for approval. The backbone of URMIS, which was launched in 1973, is butchering and anatomical terminology. Even at launch, consumer understanding of that was weak.

“That old system just wasn’t really doing its job to communicate to the consumer,” said Trevor Amen, director of market intelligence for the Beef Checkoff Program. “If you’re a butcher or a meat cutter, you really know what part of the animal it comes from. But if you’re a consumer, you just want to know what it is and what to do with it.”

Boring old name: Pork loin top loinchop
Exciting new name: Porterhouse chop (Porterhouse has been a beef-steak term for decades, but this is the first time it’s being using in relation to pork.)

The new packaging will also include cooking instructions, with recommendations for temperature and a three-minute post-preparation rest period.