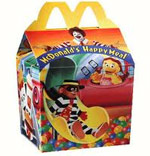 28 Jul 11 US: McDonald’s to automatically include fruit in Happy Meals

McDonald’s USA President Jan Fields has announced the company’s “Commitments to Offer Improved Nutrition Choices”, a comprehensive plan that aims to help customers — especially families and children — make nutrition-minded choices whether visiting McDonald’s or eating elsewhere. One of the changes is the automatic inclusion of a portion of fruit in children’s Happy Meals and reduced servings of French fries.

The world’s largest hamburger chain, which has come under increasing pressure from consumer groups to sell healthier food, said it would start making the changes in September. The new Happy Meals will be available in all of its 14 000 US restaurants early next year.

They will include a quarter-cup of peeled apple, and the new child’s French fry portion will be 1.1 ounces, down from 2.4 ounces previously. Choice of beverage will include new fat-free chocolate milk and 1% low-fat white milk.

The company said the changes to Happy Meals will reduce the annual consumption of America’s children by 49 billion calories.

Mrs Obama, who as US first lady has campaigned against childhood obesity, said: “McDonald’s is making continued progress today by providing more fruit and reducing the calories in its Happy Meals. I’ve always said that everyone has a role to play in making America healthier, and these are positive steps toward the goal of solving the problem of childhood obesity.”

Cindy Goody, McDonald’s senior director of nutrition, said: “We are going to be casting our gaze more closely on portion management as well as how we can introduce more food groups such as fruits, vegetables and whole grains.” The fast food chain acted after San Francisco and nearby Santa Clara County, California, passed laws that would stop free toy giveaways with unhealthy restaurant meals for children.

Happy Meals have been sold by McDonald’s for more than 30 years and traditionally include a burger, French fires, drink and toy.

Apple slices had in the past been offered as an alternative to French fries if a customer asked, but they will now be included automatically in every meal. McDonald’s said some restaurants may serve carrots, raisins, pineapple slices or oranges instead of apples.

From a McDonald’s Press Release:

Menu changes underway include the addition of more nutritionally balanced choices, along with an increased focus on providing nutrition information that enables customers and employees to make simple, informed menu decisions.

“McDonald’s will always try to do the right thing, and we know we can help make a difference in our communities,” said Jan Fields, President, McDonald’s USA. “The commitments we’re announcing today will guide the future evolution of our menu and marketing.”

“As a member of the 2010 Dietary Guidelines Advisory Committee, I applaud the commitments made by McDonald’s today,” said Roger Clemens, IFT President-Elect and Adjunct Professor of Pharmacology and Pharmaceutical Sciences at the University of Southern California. “They have captured the intent of the Guidelines and have taken a reasoned, evidence-based approach that should have a positive impact on the millions of children and adults McDonald’s serves every day.”