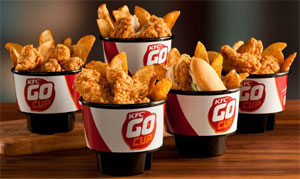 What’s the worst thing about KFC chicken? No, not the calories – rather the fact that it’s not really designed to be eaten on the go. Well, that was until KFC introduced a new menu item for people who absolutely have to have their fried chicken while driving. The KFC ‘Go Cup’ fits in a car’s cup holder – and is being hailed as a brilliant item of fast food innovation. [Click pic to enlarge]
The cups come filled with a choice of five different items, including the Chicken Littles (sandwiches with chicken, pickles and mayo), Original Recipe Bites, Hot Wings, Original Recipe Boneless or Extra Crispy Tenders. All of the varieties are served with crispy seasoned potato wedges.

When students of my entrepreneurship course ask me, “How can I come up with more good ideas?” I always tell them to study the marketplace. I believe great innovations evolve from studying products that already exist in the market, thinking about how they can be improved and asking: What do consumers need and want?

It’s really that simple. And that’s why I write over and over again about how important it is to research and understand buying habits before you come up with new ideas. Recently, a major fast food corporation really drove that point home for me. KFC, as you might have read or seen on TV, debuted an ingenious new product this month: the Go Cup.

I’m a product designer so when I read that the Go Cup, which holds smaller, snack-sized portions of food, fits 83 percent of all car cup holders, my mind was blown. KFC spent two years designing this product. It has a slit at the bottom that can be collapsed to fit different car cup holders, because there is no industry-standard size or design.

The Go Cup also conveniently separates the different kinds of food you order from co-mingling. It costs less — about half the price of the cheapest meal that was on the KFC menu — and includes five different varieties.

I couldn’t help asking myself: How has no one come up with this idea before? It seems so obvious. People love to eat in their cars, because it’s fast and convenient. Why not make the process less messy? They weren’t reinventing the wheel, just thinking about how to enhance what was already out there.

Another important lesson: KFC didn’t just rely on an assumption that their consumers yearned for a snack that was easier to eat in their cars. Their team gathered data that proved that a new innovation was needed. They learned that consumers wanted a snack that was a protein, portable, sold for a low price and that didn’t need utensils.

At the same time, KFC knew that about half its sales were being made by drive-through customers. And according a consumer research firm that surveys eating behaviour, Americans order 21 percent of all their meals from their cars. That’s an enormous market. KFC did their research. And they delivered a product that is going to be a smash, if the media blitz that has erupted in response is any indication.

The Go Cups even look like mini buckets — they managed to extend their brand even while debuting a new line.

Examples of great, marketplace-based product design are all around us. Just keep looking for them.

US: KFC's finger lickin' good debut of plant-based…
America revels in the pretzel
The father of the chicken nugget
KFC is experimenting with vegetarian fried chicken