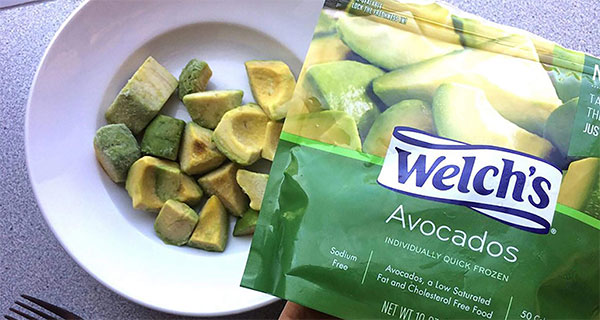 If there was ever an ‘Age of the Avocado’, we live in it. But there’s one drawback that avocado lovers have complained about: Their frustratingly short shelf life.

Avocados don’t stay ripe for long, guessing which ones are at peak ripeness can be difficult, and they brown almost instantly once peeled.

Welch’s, a US company best known for its grape juices and grape-based ingredients, has found a solution: it’s selling pre-cut, frozen avocados in 10 (283g) and 32oz (907g) bags.

“Welch’s Frozen Avocados are ripe-frozen so that they are always ready right when you need them,” the company says on its website.

Global sales of avocados reached $13-billion last year and are estimated to reach $23-billion by 2027 as the fruit — technically, the avocado is an unorthodox berry — gains popularity in China and South America.

Avoiding the ripeness and browning issues of avocados could help increase sales. Researchers have worked to create avocados that stay ripe twice as long, but Welch’s solution could simplify things even more.

Avocados were introduced into the US in the 19th century and were known as the “alligator pear” for years, until a group of growers renamed it the avocado as a marketing ploy.

In recent years, the fruit has not only become a popular food item, but something of a cultural force, with avocado toast blamed for ruining the finances of millennials, Twitter fights over whether peas should be added to guacamole, and viral videos of avocados as birthday presents.

Welch’s frozen avocados is something of a departure for the company.

Typically Welch’s offers fruit-based drinks, snacks and other frozen fruit. The company’s frozen avocados aren’t just one more frozen fruit package, but a potential solution to a problem that has long frustrated consumers. Depending on how well the avocados taste once thawed, they could be a popular, new product line.

Welch’s, owned by the National Grape Cooperative Association, is a rare food company that has remained independent in an era of food-industry consolidation.

The company was named after Thomas Bramwell Welch, who is credited with a method to pasteurizing grape juice to halt fermentation. During the temperance era, Welch’s grape juice gained popularity, especially among churches that wanted to avoid using wine in their sacraments.

Demand for avocados has been strong enough in recent years to prompt higher prices for the fruit. Avocado prices increased 125% at one point last year.

Despite an 18% increase in avocado production this year, demand remains high, prompting something of an avocado crime spree in New Zealand this summer.

While Welch’s isn’t giving away any info on its processing method to stop their avos going brown and mushy, readers may be interested in this research paper from a study undertaken some years ago in SA:

A process to prevent browning of frozen avocado halves and chunks

The successful processing of avocado fruit for frozen products such as halves and chunks, relies on the prevention of fruit browning, as well as the maintenance of taste.

Previous work showed that browning could be prevented by the use of anti-oxidants such as ascorbic acid, but at the concentrations required, product taste was adversely affected. In order to overcome these problems, a heat treatment was developed.

After fruit had been ripened to the correct softness, cleaned externally with a microbial disinfectant, peeled and sliced, fruit was dipped into boiling water for sufficient time to inactivate the browning enzyme polyphenol oxidase (PPO), as well as leach phenolics from the cut surface of the fruit.

The latter prevents enhanced flavour and bitterness associated with storage of frozen avocado.

Thereafter, fruit was rapidly frozen in liquid nitrogen, packed and stored. On defrosting, the treatment was shown to be highly effective, in that fruit browning did not occur for a number of hours after defrosting…