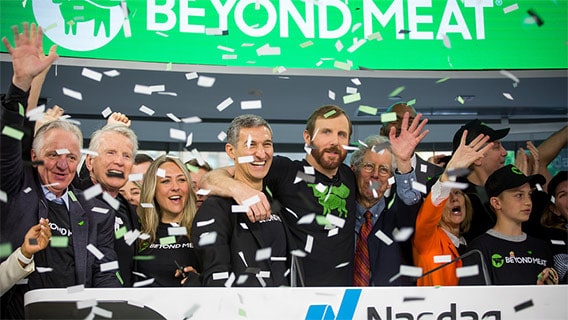 08 May 19 US: Beyond Meat sizzles as it goes public

Posted at Wednesday, May 8th, 2019 h in Top International Stuff by Brenda 0 Comments

Beyond Meat became the first plant-based food manufacturer to go public on a major stock exchange on May 4. The company’s stock, which was priced at $25 a share, closed the day up 163%, to $65.75. Beyond Meat ended the day with a market capitalisation of $3.9-billion.

Last year, Beyond Meat had revenue of nearly $88-million. Taking sales and its market cap into account, CNBC said the plant-based food maker is being valued at 44 times sales, a figure more likely to be associated with fast-growing technology companies.

The business network noted that food companies have much smaller multiples. Hormel is at 2.3 times sales, while Tyson Foods has a multiple of 0.7.

The California-based company, which makes the Beyond Burger and plant-based sausages, is growing quickly. Seth Goldman, the co-founder of Honest Tea who is the executive chairman of the Beyond Meat board of directors, told The Washington Post that guidance for sales for the first quarter of 2019 at the plant-based food maker were around $40-million, triple the same quarter a year ago.

“Consumer trends, including health and wellness, animal protection and environmental concerns, continue to gain traction, aiding sales growth prospects for plant-based meat substitutes. Millennials are driving this trend, and growing disposable incomes allow them to spend in support of their beliefs.”Jennifer Bartashus and Diana Rosero-Pena, analysts, Click here to view the research.

Given Beyond Meat’s impressive performance, it’s clear investors aren’t concerned the company has never turned a profit and posted a $29.9-million net loss last year. What interests them is its growth potential, reflected in its roughly $4-billion valuation.

The plant-based meat market is expanding at an impressive pace. Sales climbed 42% between March 2016 and March 2019 to $888-million, according to Nielsen figures. At the same time, sales of conventional meat were up 1% to $85-billion.

Despite the plant-based segment’s relatively small size, Ethan Brown, Beyond Meat’s CEO and founder, said the company is ready to take on the conventional sector and is going global.

The company recently announced it’s expanding into the nationwide retail market in Canada by the end of May, and its products are already in chains in Belgium and the Netherlands. Keeping up with demand could be a challenge should this level of growth continue.

According to Euromonitor figures cited by Food Navigator, Beyond Meat has a less than 2% market share in the retail meat alternatives segment. However, if it can push that to 5%, and the total market grows to $40.5-billion in 15 years, the company could see annual sales jump from $88-million last year to $2-billion by 2033, according to a pre-IPO report from Bernstein analysts.

With a big influx of cash from this successful IPO, a higher profile and a strong consumer base, Beyond Meat could introduce reformulated chicken strips and potentially plant-based chicken breasts or even steak, which are the most in-demand items for carnivores.

Beyond Meat has more than 60 people on its innovation team to help work on new products and improve existing ones already on the market. The pressure will remain on the company to keep innovating.

The rapid growth in the space has attracted a number of deep-pocketed competitors, many of them in the big food space.

Tyson Foods, which divested its 6.52% stake in Beyond Meat before the IPO, plans to introduce its own plant-based meat alternative this year. Other competitors include Impossible Foods’ Impossible Burger, which is being added to Burger King menus, Nestlé’s Garden Gourmet Incredible Burger and the Lightlife Burger. Memphis Meats also is working on lab-grown meat.

While Beyond Meat’s stock is sizzling, it is now a public company, meaning its finances, growth rate and every other move it makes will be magnified and scrutinised.

It may not be as frenzied as the crypto and pot trends, but the veggie burger stampede is in swing. After Beyond Meat’s stunning trading debut, companies are rushing to get their alternative-meat products to market….