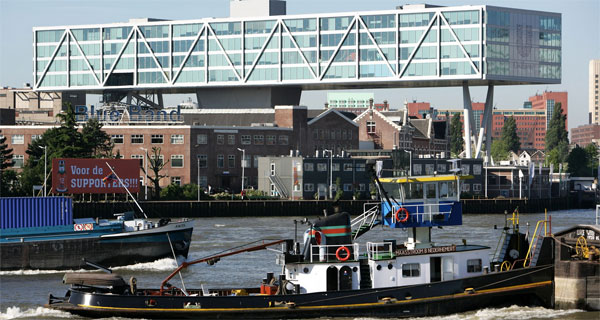 Unilever, the Anglo-Dutch consumer goods giant, has picked Rotterdam over London as its sole headquarters but denied the move was related to the Brexit vote.

Britain’s third-biggest company, which makes a number of well-known consumer brands including Marmite, Dove soap and Magnum ice-cream, has been based in London and Rotterdam for nearly a century.

The Unilever chief executive, Paul Polman, insisted the decision, which was announced after a year-long review, “has nothing to do with Brexit” and would not result in the loss of any UK jobs. He also said there would be “no change to tax” paid in the UK.

The group, which has two parent companies, is to simplify its structure into a single legal entity incorporated in the Netherlands. Its shares will continue to be listed in London, Amsterdam and New York, although it is unclear whether Unilever will still be in the FTSE 100 index.

Rajesh Agrawal, the London deputy mayor for business, said the move was “disappointing news for the capital”. He added: “It brings into sharp focus the need for the government to secure a Brexit deal that secures London as Europe’s leading business centre. The best way to do this is for London and the UK to remain part of the single market and customs union.”

Unilever said its 7,300 employees across 20 sites in the UK and 3,100 staff in the Netherlands would be unaffected by the changes, which are aimed at making the group a “simpler, more agile and more focused business”. The firm employs 169,000 people worldwide.

It is moving a small number of people from London to Rotterdam, but is keeping its building at Blackfriars in London.

Unilever has had two parent companies since its creation from the 1929 merger of the British soap maker Lever Brothers and the Dutch company Margarine Unie. It said the move to a single entity based in the Netherlands reflected the fact that the Dutch entity represents 55% of the group’s share capital and that the shares listed in the Netherlands are more liquid.

The company is restructuring its business into three divisions with more autonomy and financial responsibility, two of which – beauty and personal care, and home care – will be headquartered in London. They are already largely based in the UK, but the division heads will move to London from overseas.

This secures nearly £1bn of annual spending in the UK, including on research and development. The third division, foods and refreshments, will still be based in Rotterdam.

The company decided to review its dual corporate structure after fending off a £115bn takeover approach from US food giant Kraft Heinz a year ago. Polman questioned the UK takeover rules at the time, arguing they were more liberal than in the US or the Netherlands.

However, he denied on Thursday that Unilever’s move to Rotterdam was motivated by takeover rules.

The Dutch prime minister, Mark Rutte, who used to work for Unilever, has also pushed through tax changes to attract more overseas companies.

Bart Le Blanc, a partner at global law firm Norton Rose Fulbright in Amsterdam, said: “The investment and regulatory environment in the Netherlands is highly attractive for multinational enterprises. A key element to this is the proposed abolition of Dutch dividend withholding tax. Unilever is a great example of the Dutch government’s focus and we see similar developments in, for instance, the financial services industry.”

The UK’s Department for Business, Energy and Industrial Strategy said: “As the company itself has made clear, its decision to transfer a small number of jobs to a corporate HQ in the Netherlands is part of a long-term restructuring plan of the company and is not connected to the UK’s departure from the EU.”