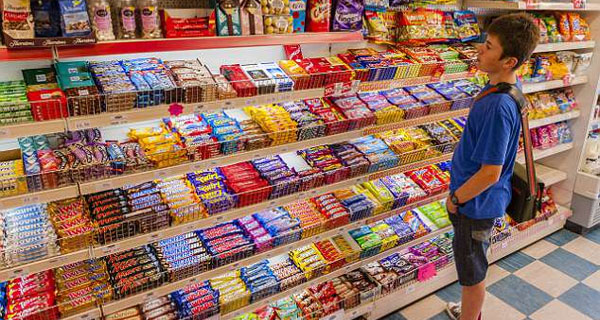 27 Jun 18 UK: Sweets, snacks at checkouts to be banned

Parents will no longer be forced to run the gauntlet of ‘candy canyon’ racks of sweets at store checkouts under new UK government plans to tackle obesity.

Shop staff will also be banned from tempting customers with special offers for chocolate, crisps or sweets.

The moves are part of a major strategy by the Government to halve childhood obesity by 2030 – and save the NHS a fortune – unveiled recently by Health Secretary, Jeremy Hunt.

As well as introducing new legislation to scrap checkout confectionery displays, the measures, which will open for consultation by the end of the year, include:

The proposals also pledge to “help close the deprivation gap” by looking at why children from poorer areas are more than twice as likely to be overweight, and encourage all primary schools to introduce a daily “active mile” for children. Official advice recommends children should do 60 minutes of activity per day.

Health campaigners have praised Ministers for finally grasping the scale of the obesity crisis but said action was needed now, not after years of consultations.

However, the food industry warned the measures would cause ‘deep disquiet’ and could cost jobs.

Woolies did it, and it has cost them hugely in lost “candy” sales, so I’m guessing the other supermarket groups won’t unless legally compelled to. https://t.co/ewkUXRSTRH

Announcing the measures this week, the Department of Health said: ‘We intend to introduce legislation to ban checkout, end-of- aisle and store entrance deals and buy-one-get-one-free deals. This will apply to food high in fat, sugar and salt sold in supermarkets and online.’

Hunt said: ‘Parents are asking for help… it is our job to give power to parents to make healthier choices, and to make their life easier in doing so. The cost of obesity – both on individual lives and our NHS – is too great to ignore.’

Preventing shops from the hard sell of chocolate at checkouts would be a victory for chef and campaigner Hugh Fearnley-Whittingstall, who took WH Smith to task over such tactics in the recent BBC series ‘Britain’s Fat Fight’.

Besides offering sweets piled high in what critics have dubbed ‘candy canyons’ its other tactics included offering special deals on large chocolate bars at manned and self-service tills.

Dr Rangan Chatterjee, a GP and star of BBC1’s Doctor In The House, said: ‘We haven’t suddenly got a generation of kids who are lazy, gluttonous and want to gorge on rubbish all the time.

‘The environment has changed and the Government needs to help create a healthy environment,’ he said.

Public Health Minister, Steve Brine, said the fight against childhood obesity was ‘a battle we cannot afford to lose’.

But Tim Rycroft of the Food and Drink Federation said: ‘There will be deep disquiet in the food and manufacturing sector.’

A WH Smith spokeswoman said: ‘We continue to extend our healthy eating range… and the visibility of healthy choices.’

What has already been done?

A sugar tax on manufacturers who sell high-sugar drinks came into force in April in the UK.

It means some drinks have increased in price while other brands have cut the sugar content of their drinks to avoid the levy.

The tax currently doesn’t cover flavoured milk drinks but it could in the future.

The jury is still out on whether the tax will have the intended effect of putting people off buying and consuming sugary soft drinks, which are thought to be the biggest contributor to obesity.

Public Health England has also started a programme challenging manufacturers to reduce sugar content in products like cakes, biscuits and cereals by 20% over the next four years.

How bad is the UK’s child obesity problem?

The UK has one of the highest proportions of overweight and obese children in the EU.

In England, 22% of children are overweight or obese when they start school at the age of four or five, increasing to 34% during their time at primary school.

Recent figures show that one in 25 children aged 10 or 11 is severely obese.

Children are measured in different ways and at different ages across the UK.

In Wales, 26% of children aged four to five are overweight or obese, and in Scotland 14% of under-16s are at risk of obesity.

Childhood obesity is a worldwide problem, but it’s estimated to cost the UK economy £27bn a year, and the NHS around £5bn, in treating illnesses related to the issue, such as type 2 diabetes and some types of cancer.