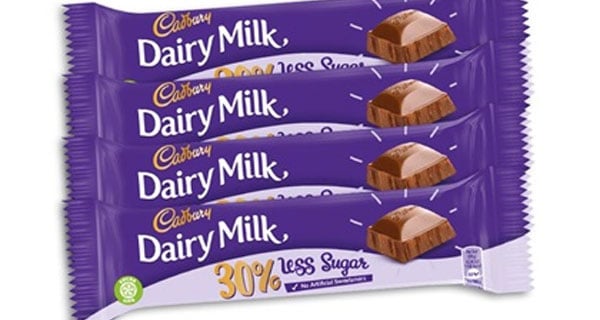 Cadbury is to launch a new version of its famous purple-liveried Dairy Milk bars with 30% less sugar. It will be released next year in a bid to tackle the UK’s rising obesity levels (and stop the government introducing a sugar levy on confectionery).

The lower-sugar bar took a team of 20 scientists, nutritionists and chocolatiers almost two years to finesse, the company said. The recipe does not rely on artificial sweeteners, colours or preservatives but instead includes more fibre in place of some of the sugar.

However, the confectionery giant is not risking the wrath of Dairy Milk aficionados and intends to sell the new bar alongside those made to the original recipe, even though it insists the diet versions taste as good.

“We’ve tested this with hundreds of consumers and they love it,” said Glenn Caton, president of Northern Europe of Mondelēz International, the US multinational company that bought Cadbury in 2010.

“It’s very tricky to reformulate chocolate because it’s just cocoa, sugar and milk and if you take one thing out, it changes the structure,” said Caton, who claimed he could barely taste the difference between the two bars.

“We’ve used fibre as an alternative to some of the sugar and found it doesn’t have a negative impact on the taste or structure.”

The food industry is under growing pressure from the government to cut the sugar content of their products amid an obesity crisis that has made the UK the most overweight nation in western Europe.

In April the sugar tax came into effect but before that deadline many drinks, including Irn-Bru, Sprite, Fanta and Dr Pepper had been reformulated to avoid the new tax or avoid its highest rates.

Dairy Milk was launched by George Cadbury, a scion of the founding Quaker family, in Britain in 1905 and is the UK’s biggest selling brand. However, despite rising levels of obesity, chocolate sales are actually in decline, due to major supermarkets moving confectionery away from their checkouts and alternative sugar hits provided by high street chains.

Mondelez is also under competitive pressure from arch rival Nestlé, which claimed a world-first in March by restructuring the sugar it uses in its confectionery to produce a white chocolate bar with 30% less sugar than its usual Milkybar brand.

Despite the drive to eliminate sugar, Caton said it would have been a controversial move to simply axe the current recipe.

“Consumers love original Cadbury Dairy Milk,” he said. “We want to offer this as a choice, not as a replacement to people who want to treat themselves. We think offering 30% less sugar [bars] is a more balanced approach than doing something controversial like taking Cadbury Dairy Milk away.”

In 2016, Public Health England (PHE) set a voluntary target for the industry to reduce the level of sugar in foods that contribute the most to children’s calorie intake by a fifth by 2020. However, in May it emerged that manufacturers and retailers missed the first milestone of achieving a 5% cut in year one.

“This announcement shows reducing sugar in chocolate confectionary is possible and we look forward to seeing future reductions across more of its confectionary range.”