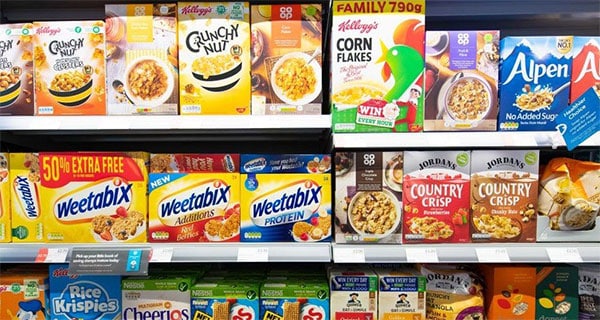 Kellogg has lost a high court battle against the UK government’s plans to restrict retail promotions in England of foods high in fat, salt and sugar (HFSS).

In-store promotions on food and drink high in fat, salt or sugar will be restricted under new rules for England. But food giant Kellogg’s took the government to court arguing the rules did not take into account the nutritional value of added milk.

But the Royal Courts of Justice ruled in favour of the government. Kellogg’s said it was “disappointed”.

“It makes little sense to us that consumers will be able to buy other products, like donuts and chocolate spreads, on promotion – but not many types of breakfast cereals,” said Kellogg UK MD, Chris Silcock.

The Department of Health and Social Care said it strongly welcomed the judgement as location promotion restrictions were expected to deliver more than £57bn of health benefits.

“Together with the volume price restrictions, these changes will protect children up and down the country from products high in saturated fat, sugar or salt,” a spokesperson said.

From October, foods deemed high in fat, sugar or salt will be banned from prime spots such as checkouts, store entrances, aisle ends and their online equivalents.

The halt on promotions such as buy-one-get-one-free offers has been delayed by the government for 12 months due to the cost of living crisis.

Popular Kellogg’s brands such as Crunchy Nut Corn Flakes and Fruit and Fibre are classified as high sugar in their dry form.

But Kellogg’s argued including added milk would change the calculation by reducing the proportion of sugar and salt content relative to the weight of the overall serving. The company said independent market data showed cereals were eaten with milk or yoghurt in 92% of cases.

But Judge Mr Justice Linden said Kellogg’s cereals “do not come with instructions for preparation which say that they should be consumed with milk”.

He said there was “no dispute” that breakfast cereals can be part of a healthy diet, but added, however, that promoting the nutritional benefits of a particular breakfast cereal “does not affect the point that if it contains excess fat, sugar or salt, that feature of the product is adverse to a child’s health”.

“Nor does mixing a breakfast cereal which is high in, for example, sugar, with milk alter the fact that it is high in sugar.”

His judgement said he found no unfairness to Kellogg’s and the public health case for the new rules was compelling, proportionate and rational.

Kellogg’s Silcock said the firm would not appeal against the judgement, but urged the government to rethink the new rules.

“By restricting the placement of items in supermarkets, people face less choice and potentially higher prices,” he added.

So where does this ruling leave Kellogg’s and the rest of the food and beverage industry?

“The court has dismissed all of Kellogg’s arguments so this is the end of the road for Kellogg’s challenge,” said Katrina Anderson, food lawyer at Osborne Clarke.

“Apart from the obvious point that this means that the rules on volume promotion and placement will come into effect as planned this year, the courts comments also have implications for challenges more generally.  Kellogg’s sought to highlight many of industry’s concerns with the nutrient profiling model – particularly those relevant to breakfast cereals.

“The court has concluded that the various reviews of the HFSS model and the consultation on the new legislation was more than ample opportunity for industry to raise these concerns and the concerns that were raised have been properly considered by government. They have also said that the model itself should be treated as an established model and therefore need not have been specifically reviewed by Parliament when being used to create new rules.

“This effectively closes down the possibility for future challenges on the basis that the nutrient profiling model itself is problematic and sometimes produces results that seem counterintuitive such as cheeses and juices typically being classified as HFSS whereas a burger may not be. It also means that the government will not be forced to allow Parliament to scrutinise the HFSS model either now or in the foreseeable future.

“In practice this means that most companies will focus on ensuring compliance with these rules and also the forthcoming advertising restrictions on HFSS as the legal avenues for challenge now appear to be largely exhausted.”