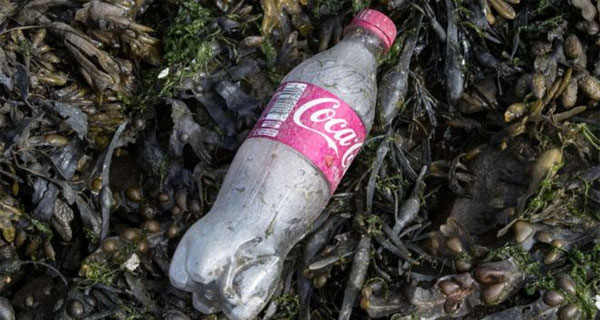 More than 40 UK-based companies have signed up to a pact to cut plastic pollution over the next seven years.

The firms, which include Coca-Cola and Asda, have promised to honour a number of pledges such as eliminating single-use packaging through better design.

They have joined the government, trade associations and campaigners to form the UK Plastics Pact.

The signatories are responsible for more than 80% of plastic packaging on products sold through UK supermarkets.

One of the promises which companies, such as consumer goods giant Procter & Gamble and Marks & Spencer, have signed up to is to make 100% of plastic packaging ready for recycling or composting by 2025.

Led by the sustainability campaign group WRAP, the pact is described as a “once-in-a lifetime opportunity” to rethink plastic both to make use of its value and to stop it damaging the environment.

WRAP’s chief executive Marcus Gover, said: “This requires a whole scale transformation of the plastics system and can only be achieved by bringing together all links in the chain under a shared commitment to act.

“That is what makes the UK Plastics Pact unique. It unites every body, business and organisation with a will to act on plastic pollution. We will never have a better time to act, and together we can.”

The set of pledges to tackle plastic pollution over the next seven years include:

The pact is also supported by the Ellen MacArthur Foundation.

The yachtswoman, who broke the solo record for sailing around the world in 2005, has long campaigned for plastic products to be re-used and not allowed to enter the oceans.

Research conducted by her foundation concluded that 95% of plastic packaging around the world is used only once.

She said the Plastics Pact would create “a circular economy for plastics that tackles the causes of plastics waste and pollution, not just the symptoms.”

“Focusing on innovation, better packaging design and end-of-use systems will not only generate long-term benefits for the environment, but is also a huge economic opportunity.”

The agreement has been welcomed by environmental groups who have for years been critical of businesses for failing to design products with recycling in mind.

Friends of the Earth said government measures were also needed to make sure the targets are met.

Julian Kirby, plastics campaigner for Friends of the Earth, said: “To discourage industry from using virgin plastic, and to boost their recycling and re-use of the material, regulations and taxes should be introduced.”

The pact is the latest in a flurry of actions designed to meet public concern about plastic waste, the so-called “Blue Planet” effect following the television series narrated by Sir David Attenborough.

The test will be whether the pledges are translated into real changes to products and the ways they are sold, to make recycling easier and more effective and to do that quickly.

Environment Secretary Michael Gove said that government, businesses and the public had to work together to fight plastic waste.

“I am delighted to see so many businesses sign up to this pact and I hope others will soon follow suit.”