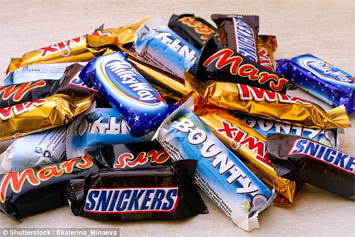 Most high-sugar products, including yoghurt, fizzy drinks and breakfast cereal, can be reformulated using artificial sweeteners, but chocolate makers say doing this ruins the taste of their products — and can even have a laxative effect.

Now, reports the UK Sunday Times Mars, Nestlé, the owner of KitKat, and Mondelez, the American food giant behind Cadbury, are preparing to take a bite out of chocolate bars to avoid being named and shamed in a series of Public Health England (PHE) reports on childhood obesity, the first of which will be released next month.

In August last year, PHE published an action plan to combat childhood obesity. The document revealed the body aims to significantly reduce England’s rate of childhood obesity within the next ten years by introducing a soft drinks levy, cutting sugar in products by 20 per cent, supporting businesses which aim to make their products healthier and helping children enjoy an hour of exercise per day.

The manufacturers have held meetings with PHE officials and suggested reducing the size of their products by 20% — the amount by which the agency is seeking to cut sugar across a wide range of food and drink products by 2020.

The companies have yet to decide whether they will cut prices at the same time.

The targets set by PHE come on top of reductions already made by manufacturers. The agency will lay out the targets in the report next month. It said progress would be measured in average sugar content per 100g of product, or by reductions in portion sizes.

Mars and Mondelez declined to comment on this report. Nestlé said reducing the size of its products was “an effective way to reduce sugar” — though some might scoff, notes The Sunday Times.