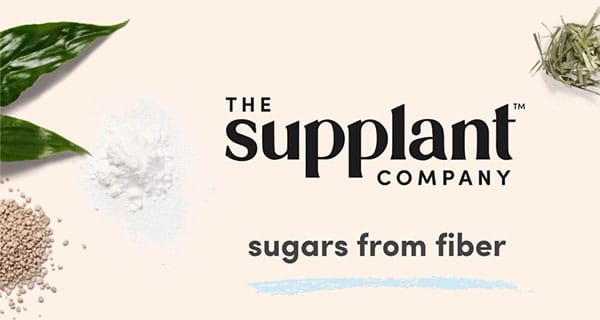 These innovations are an upcycled baking sweetener devised from plant fibres, and sugar crystals coated with Reb M designed for hot beverages.

UK food tech start-up, The Supplant Company, has devised an ingenious sweetening option that ticks several on-trend boxes ie taking fibres from discarded parts of plants — including corn cobs, straw or wheat bran — and breaking them up into naturally occurring sugars. These sugars metabolise like fibre but sweeten like sucrose, though with less intensity.

Or as its website states: “Building a better food system using the forgotten half of the harvest… Using these fibre-rich parts of crops which currently don’t enter our food system will be crucial for the future of sustainable agriculture.”

As Supplant slowly enters the market, founder and CEO Tom Simmons says there’s a bigger story to tell consumers about its product.

“We’re really trying to get that story out about how we make this ingredient, where it comes from, why that means it’s healthy and safe and good and great — but also why that means it’s sustainable and ecological, and can actually contribute to big global issues around feeding the world and around climate change,” Simmons enthuses.

Reducing waste and sugar, all in one with Supplant

With a doctorate in molecular plant science from the University of Edinburgh, Simmons closely studied the fibres in materials like corn cobs that are produced in abundance but have low value in the food system.

From a chemistry perspective, these are made up of polysaccharides that are broken down into shorter chain oligosaccharides and sugars. The finished blends of fibre-derived sugars and fibres can be used for cooking, baking and mixing to make delicious products. These behave like traditional sugar in food – but retain certain fibre-based qualities.

Simmons explains there are a few steps to turning plant fibres into sweetener. First, the company grinds the plant material into powder. Then, it uses an enzyme derived from fungi to help the sugars break free. Finally, the ingredient goes though a standard processing step to remove any trace amounts of enzymes or undesirable minerals.

Supplant was designed for baking applications, and Simmons says it has the same browning, bulking and structural properties as sugar. Historically, these have been some of the most difficult functions to replicate in sugar replacements. Simmons notes that while there are several options for sugar-free beverages, it’s much more difficult to bake a cake without actual sugar.

Getting get the functionality and sugar-like sweetness right are further abetted by the fact that this upcycled product from agricultural side-streams has less than half the calories of sugar, has a low glycaemic response compared to glucose and is a prebiotic and good for gut health.

“It’s got a sort of mild neutral sweetness… It’s less sweet, but the nice thing about it is there’s no weird aftertaste. It is a sugar. …It’s not like a stevia … or a lot of the high-intensity sweeteners.”

Because Supplant is less sweet, substituting it one-for-one for sugar could result in a product that looks right, but tastes a bit off. Adding more Supplant to a recipe to make it taste the same would impact the way the finished product comes out, since sugar takes on many roles in baked goods.

Simmons asserts that careful reformulations, however, have resulted in products made with Supplant that taste like their sugar-laden counterparts.

As a newer entrant to the sugar replacement category, Supplant is working on its scale and rollout. Simmons says the ingredient has received self-affirmed GRAS status, meaning it can be used in products throughout the US. The Supplant Company will be pursuing further regulatory steps, including in different countries, as it continues to scale commercial operations.

The company currently has a few partners using Supplant in their products, including regional bakeries Cookie Fix in Alabama and You’re a Cookie in Illinois, and Arizona ice cream maker Sweet Republic. Supplant has also partnered with Michelin-starred chef Thomas Keller to create dessert items made with the sweetener at The French Laundry and Bouchon Bakery in California, and Per Se in New York City. Keller and Supplant are also working together on chocolate bars sold online.

Simmons is still considering whether Supplant will stay focused on the business-to-business realm, or design a consumer ingredient.

Currently, Simmons says he can make “double-digit tons” of the sweetener — “not yet enough to disrupt the sugar industry”, but Supplant is just getting started.

The company currently has a two-step manufacturing process — the first phase takes place in a European facility and the final processing and bagging happens in Texas — but the company is working on figuring out the best supply chain and scaling pathway.

With many millions in venture capital now behind it, Simmons expects Supplant to fully manufacture the product in the US soon, and its cost — which is currently high given the small scale — to come down.

Supplant isn’t alone in bringing a new type of sweetener to the table. US company, Sugar Foods, is offering its new Reb M and sugar combo, N’Robed Sugar Crystals, to food service customers.

The product, created for drinks, is made of sugar crystals that are lightly coated with Reb M — short for Rebaudioside M — one of many sweetening components found naturally in the stevia plant.

Sweetener companies have been working to isolate Reb M which is more sugar-like and does not have the bitter aftertaste some consumers associate with stevia. Because of the way Reb M is metabolised, it has no calories, but as a component of stevia, it is much sweeter than sugar.

Sugar Foods director of marketing, Krista Locke, says, “There’s a lot of people that are trying to reduce their sugar intake, It’s an exciting ingredient to be able to play with and figure out that there’s a way to offer sugar in a better way.”

Ingredient company Amyris has a process to create Reb M without stevia through fermentation. The company has partnered with Ingredion on commercialisation, and has a consumer-facing sweetener brand called Purecane.

Sugar adds both sweetness and mouthfeel to beverages. Consumer testing has shown that mouthfeel is as important as sweetness, Locke says, but most alternative sweeteners lack in this area. N’Robed Sugar Crystals deliver the mouthfeel because they’re made with sugar, but much less is needed to get the same degree of sweetness because of the Reb M, according to the company.

“If you keep some of that sugar, it’s going to deliver a very similar taste,” Locke says “It’s imperceptible, through our consumer research at least…… Consumers couldn’t tell the difference and would oftentimes prefer the N’Robed Sugar. Keeping some sugar there was beneficial.”

Sugar Foods is not the creator of N’Robed Sugar Crystals, but sells it primarily to food service operators. It’s available in packets, canisters and in bulk. While there is a higher cost to produce the ingredient, Locke says it actually presents a cost savings to businesses because not as much of the sweetener is needed.

Consumer-facing N’Robed products are designed to present a sweetness equivalency. Packets of N’Robed Sugar, for example, have less sweetener than packets of sugar, but the sweetness is the same. So a consumer who takes two sugars in their coffee will also take two N’Robed sugars.

While N’Robed works well in beverages, Locke says Sugar Foods is also exploring how well it performs in other applications looks promising in baking.