04 Mar 17 This oven could change how we cook 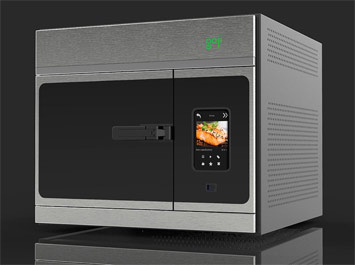 By using radio frequency technology, it can prepare all the components of a dinner, at the same time, just right.

The microwave oven needs a do-over.

Sure, it once seemed a miraculous device, an appliance for our times. It served the needs of a culture on the run, not to mention how it brought magic to making popcorn. But microwaves never made it beyond a supporting role in the kitchen because frankly, it couldn’t be trusted to cook a meal from scratch.

For starters, because they work from the outside in, microwaves can’t really cook food evenly, far from ideal if you’re preparing raw meat. Plus, they can suck all the moisture out of some foods, turning bread and other carbohydrates into inedible bricks.

So, although as many as 90 percent of American homes have a microwave oven, according to the US Labor Department, they are mainly used just for reheating meals and popping popcorn.

Blame it on the magnetron, the cooking element of every microwave oven. It sends out the waves that stimulate food molecules and create heat, but does so with a shotgun approach. Some parts get hot, others not so much.

And, while using the settings for different foods may help a bit, microwave cooking is still largely a hit-and-miss operation.

Now, however, an Israeli company named Goji Food Solutions says it has a better idea.

Cooking a whole meal at once

It’s based on solid state radio frequency (RF) technology that provides much more precision and control over the radio wave energy being emitted.

Not only does that enable food to be cooked faster, but it also makes it possible to treat different foods in different ways, all at the same time.

In other words, a RF oven would allow you to cook a whole meal at once, with amplifiers sending out one radio beam set to cook meat, another to take care of vegetables and a third to bake a dinner roll.

That works because Goji has added to the RF technology precise sensors that can read the makeup, thickness and moisture of the food and appropriately adapt the frequency, phase and amplitude of the radio waves.

The process creates a feedback loop in which the amount of radio waves reflected from within the food is detected. Every few seconds, an algorithm recalculates the sensor data and the signal is adjusted as needed.

“In order to obtain optimal heating results for a particular dish, our system senses the food and adjusts the heating parameters using a unique algorithm in real time,” explains Goji president Yuval Ben-Haim.

“This process also allows us to make adjustments when the food changes during the heating process; for example, a cake which rises during baking, frozen meat being defrosted, or apple chips being dried. Beyond cutting cooking time significantly for a wide range of dishes, this method results in tastier and healthier food by cooking it more evenly.”

RF-prepared food is healthier, according to Goji, because the rapid cooking makes it possible for the food to retain more nutrients and moisture.

To show just how precise RF cooking can be, Goji officials have demonstrated how they can effectively cook a salmon still frozen in a block of ice—without melting the ice…..