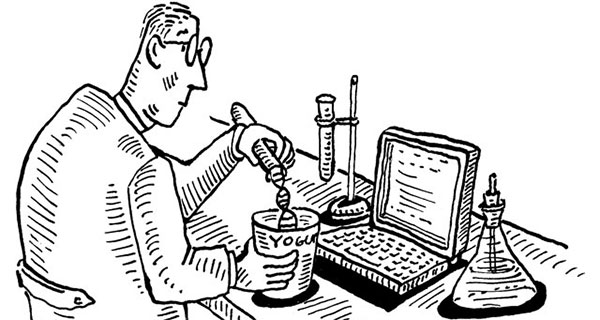 We’ve heard the hype: CRISPR will revolutionise biotech, cure disease, resurrect extinct species, and even create new and (not so) improved humans. Long before there were CRISPR babies, there was CRISPR dairy. So what is CRISPR — and what’s it doing in our food?

The first genetically modified crops were labelled “Frankenfoods” by critics and are banned in the European Union. Can CRISPR succeed where fish tomatoes failed? And what’s yoghurt got to do with it?

When modern genetic modification began in the 1970s, scientists typically took a gene that conferred desirable properties in one species (say, cold tolerance in a winter flounder) and blasted it into the genome of another species (say, a tomato). The hope was that the alien gene would be incorporated, albeit at random, into the host plant’s DNA, and that the resulting hybrid would gain a useful new function.

Frost-resistant fish tomatoes, as it happens, were not particularly successful in field trials, and they became a symbol for everything that critics — of which there were many — saw as wrong with genetically modified foods.

Next-generation gene editing, using CRISPR, promises to be far more precise, faster, and cheaper. As Jennifer Kuzma, the co-director of the Genetic Engineering and Society Center at North Carolina State University, explained it to Gastropod, if DNA is a book, CRISPR is like a pen.

“You can go in and you can edit the letters in a word, or you can change different phrases, or you can edit whole paragraphs at very specific locations,” she said. “Whereas with first-generation transgenic techniques, it was essentially throwing a new paragraph into a book.”

CRISPR proponents such as Yiping Qi, a genetics researcher at the University of Maryland, say this new tool promises to transform agriculture. Researchers are already using it to edit a wide variety of foods — not just commodity crops such as soy and corn, but also more minor vegetables and fruits.

“CRISPR has been put into many, many crops — nearly all the crop plants that you can transform,” said Qi, whose lab has already used the technology to dramatically raise the yields of rice crops and to tweak the colour of carrots.

And whereas the majority of first-generation GMOs were designed simply to be herbicide resistant, Kuzma told us that CRISPR is now being used to create a much wider range of traits, “because you don’t need to invest as much money necessarily in the development of the crop.”

None of these CRISPRized crops are on supermarket shelves just yet, but several are coming soon.

To understand how CRISPR will transform our food, this episode of Gastropod (a podcast about food with a side of history and science), starts at DuPont’s yohgurt-culture facility in Madison, Wisconsin.

Dennis Romero, a senior scientist there, tells the story of CRISPR’s accidental discovery — and its undercover but ubiquitous presence in the dairy aisle today. Kuzma and Qi expand on the technology’s potential, both good and bad, as well as how it might be regulated and labelled.

And Joyce Van Eck, a plant geneticist at the Boyce Thompson Institute in Ithaca, New York, tells us how she is using CRISPR, combined with her understanding of tomato genetics, to fast-track the domestication of one of the Americas’ most delicious orphan crops.

So should we be worried about CRISPR’s unintended consequences for the environment and human health, or excited about what it means for the future of food? Will we all soon be eating CRISPRized dishes — or are we already, and we just don’t know it?

Listen to the podcast, click below, for a taste of the CRISPRized future…