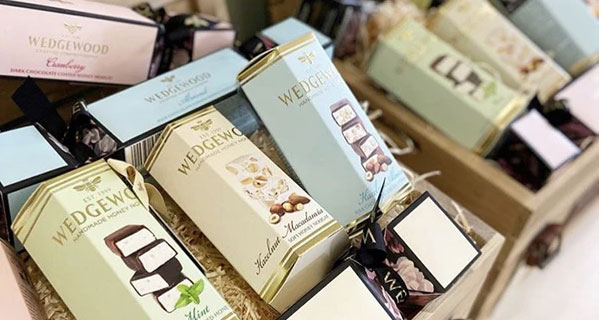 Gilly Walters began making nougat in her kitchen in Hilton in the KZN Midlands to make ends meet and created an iconic SA confectionery brand and legacy. Here’s a great tribute to the Walters family and their delectable products…

Serendipity is a wonderful thing. One minute you’re ambling around a charming country development called Piggly Wiggly in the KZN Midlands, stepping over the tracks of a miniature train, and then bam! It’s as if you’ve been transported to Paris and find yourself staring longingly into the display window of a confiserie. Welcome to nougat and nostalgia.

The Wedgewood Nougat emporium is a tactile experience extraordinaire. Pretty pastel-hued boxes have been carefully curated on shelves. Mini hat boxes filled with bon bons are adorned with hand-tied bows. Petite boxes are sealed with 2D golden bees. The sensory overload renders you momentarily incapable of deciding where to start, but then you’re brought back to reality with a warm African welcome from manager, Paddington Ngwenya.

Looking dapper in a formal white shirt, black tie and tailored apron, he patiently talks you through a tasting of the free samples, and his delight at the gentle oohs and aahs they elicit is obvious.

Everyone loves a rags-to-riches story, and this charming store pays tribute to matriarch, Gilly Walters, who began making nougat to support her family financially when her husband Taffy became ill with cancer.

“We didn’t have money, we lived from hand to mouth,” explains Paul Walters, Gilly’s son and CEO of Wedgewood. “My mom is an inspiration and has a flair for food. She would host classical music revival concerts with (concert pianist) Christopher Duigan at home and would serve tea or coffee and snacks, or do seated dinners for 50 people. She decided to try nougat and it took her six months to perfect it. My mom is a tenacious old bat!” he says fondly.

“When dad got cancer, we sold our farm. My folks then bought a wedge-shaped piece of land between two forests so, when they made nougat, it was named Wedgewood after the house. It was like a kibbutz – they got friends together and built nine houses on about 60 hectares. It is now a conservation estate,” says Paul, who lives there with his family.

Gilly’s honey nougat was such a success with friends and family that she began selling it at the Pietermaritzburg Farmer’s Market in 1999, and shortly thereafter added a traditional shortbread biscuit to her repertoire. By the following year it was stocked in two local supermarkets and in 2006 exports began under the label “Walters”.

Nowadays it is readily available in national food stores and chemist chains and their online platform showcases a full range of products. Paul’s artist wife, Zoe, created the dramatic black floral design that is used as wallpaper in the emporium and has also inspired the beautiful packaging, gifting and hampers.

It’s always been a hands-on family enterprise with all three sons also working in the business over the years. “I remember my dad would heat the blade of a knife to hand-cut the nougat which gave him callouses. He passed away three years ago and my mom decided to let go of the reins and do succession planning,” says Paul.

Their flagship store at Piggly Wiggly opened in November 2019 and is, for now, the only one in the country. Perhaps it seems like an unusual location but it’s close to the original home Gilly started the business in and also to Wedgewood Farm, a decommissioned dairy farm that has been home to their “bakery and makery” for 15 years.

It’s a small detour off the beaten track but there’s a shop and small coffee bar with sweeping views of the rolling countryside. If you’re lucky, you might even find some samples on offer from the test kitchen.

Wedgewood is a self-proclaimed “inventor of fine things” and the most recent nougat-inspired creation is ice cream. Those familiar with the restaurant The Farmer’s Daughter, in Howick, will know that owner Jen Pretorius has an enviable reputation for making ice cream. Her business closed down during Covid-19 and she recently joined Wedgewood where she’s reincarnating their liquid nougat into ice cream flavours that include peppermint, white chocolate and butterscotch ripple, and hazelnut nougat-chino. Unfortunately, the ice cream is only available at the emporium where it often outsells its original nougat counterparts.

“South Africans eat a lot of nougat. I have travelled around the world and we are one of the largest consumers per capita of nougat. In America they don’t know it except on the east coast in the Jewish, Greek, Spanish and French communities.

“Our export markets are Australia, Denmark, Germany, UK and some African countries. They like our nougat because they are not as sweet as the European ones. We use 10% honey – which is more honey than our competitors – to get the flavours right,” says Paul.

Wondering if it’s a closely guarded secret, I ask who the keeper of the recipe is? “It’s up there on the wall,” says Paul waving towards the “makery” (factory) area located behind the farm shop. I feel somewhat deflated at the lack of mystery until Paul clarifies further.

“The method is as important as the recipe. That’s a work in progress because the natural ingredients can change, like honey changes from the start to the end of the season and so do the levels of fructose and glucose…..