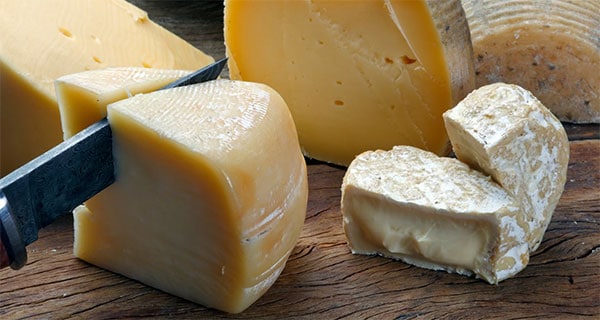 A solid white mass found in a broken jar in an Ancient Egyptian tomb has turned out to be the world’s oldest example of solid cheese. 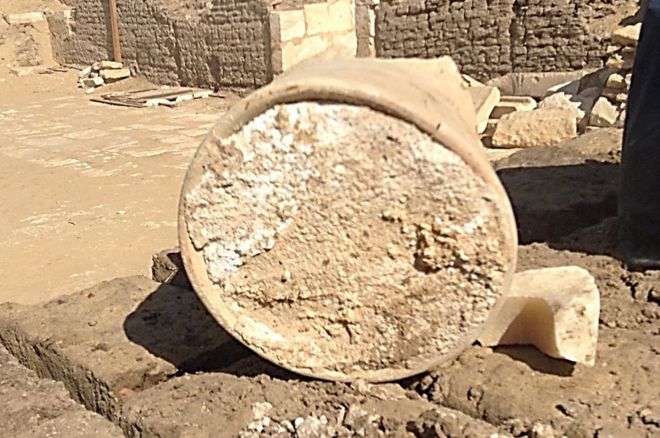 Probably made mostly from sheep or goats milk, the cheese was found several years ago by archaeologists in the ancient tomb of Ptahmes, who was a high-ranking Egyptian official.

The substance was identified after the archaeology team carried out biomolecular identification of its proteins.

The discovery is significant as there has been no previous evidence of Ancient Egyptian cheese production, authors of the report, recently published in the journal Analytical Chemistry, said.

“The material analysed is probably the most ancient archaeological solid residue of cheese ever found to date,” said Dr Enrico Greco, from the University of Catania, who worked with colleagues at the Cairo University in Egypt to determine its identity.

This 3,200-year-old find is exciting because it shows that the Ancient Egyptian’s shared our love of cheese – to the extent it was given as a funerary offering.

But not only that, it also fits into archaeology’s growing understanding of the importance of dairy to the development of the human diet in Europe.

About two-thirds of the world’s population is lactose intolerant. So although dairy products are a daily part of the diet for many living in Europe, Northern India and North America, drinking milk in adulthood was only possible from the Bronze Age, over the last 4,500 years.

For most of human history, adults lost the ability to consume milk after infancy – and the same is true of people who are lactose intolerant today.

After weaning, people with lactose intolerance can no longer produce the enzyme lactase. This is necessary to break down the lactose sugars in fresh milk into compounds that can be easily digested.

People with lactose intolerance experience unpleasant symptoms if they consume dairy products such as bloating, flatulence and diarrhoea.

Ancient DNA analysis on human skeletons from prehistoric Europe places the earliest appearance of the gene lactase gene (LCT) – which keeps adults producing lactase – to 2,500BC.

But there is plenty of evidence from the Neolithic period (around 6,000-2,500BC in Europe) that milk was being consumed.

This is not totally surprising though, as the Neolithic marks the start of farming in most regions of Europe – and the first time humans lived closely alongside animals.

And although they were unable to digest milk, we know that Neolithic populations were processing milk into substances they could consume.

Using a technique called “lipid analysis”, sherds of ancient pottery can be analysed and fats absorbed into the clay identified. This then allows archaeologists to find out what was cooked or processed inside them.

Although it is not yet possible to identify the species of animal, dairy fats can be distinguished. It is also challenging to determine what techniques were being used to make dairy products safe to consume, with many potential options.

Fermenting milk, for example, breaks down the lactose sugar into lactic acid. Cheese is low in lactose because it involves separating curd (from which cheese is made) from whey, in which the majority of the lactose sugars remain.

Clay sieves from Poland, similar to modern cheese sieves, have been found to have dairy lipids preserved in the pores of clay, suggesting that they were being used to separate curds from the whey. Whether the curds were then consumed or attempts made to preserve them by pressing into a harder cheese is unknown.

Fermentation of milk was also possible to our ancestors, but harder to explore with the techniques currently available to archaeology.

While the techniques from bioarchaeology have provided this fantastic detail on Neolithic diets, where the science stops, experimental archaeology can explore what was possible.

By using these ancient techniques, we have discovered that a wealth of different means of curdling the milk would have been possible, each producing different forms, tastes and amounts of cheese.

And such specialist knowledge may have been akin to the spread of bronze smelting at the end of the Neolithic.

Dairy may have had a special status among foodstuffs. For example, at the major late Neolithic feasting site of Durrington Walls, not far from and contemporary with Stonehenge, dairy residues were found in a particular kind of pottery vessel and concentrated in the area around a timber circle – a form of Late Neolithic monument.

From the Bronze Age, however, lactase persistence offered an advantage to some people who were able to pass this on to their offspring.

It also seems that this advantage was not solely because of increased calorie and nutrient intake alone – but because of the special status dairy foods may have had.

The development of this biological adaption to fresh milk took place after humans had already found ways to safely include dairy products in the diet.

This shows that humans are not only able to manipulate their food to make it edible, but that what we consume can also lead to new adaptations in our biology.

The Conversation, authored by Penny Bickle, lecturer in archaeology, University of York.

Food history: Why we ‘Got Milk’

Should we be drinking milk? Arguments for and against dairy