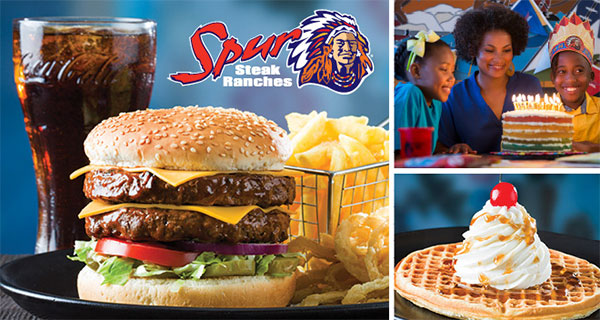 Spur was founded in 1967 when Allen Ambor invested R4000 into opening the Golden Spur in Newlands, Cape Town.

It sparked the rise of South Africa’s most popular steakhouse franchise. Today you’ll find a Spur in 15 countries and every town and mall in South Africa.

Following the recent publication of Ambor’s autobiography, Cape Talk’s Lester Kiewit interviewed him (left) about how it all started and how he grew that first Spur into a national icon.

Listen to the interview below….

People had never seen anything like it… service was fast, the place was clean and lively… We’ve carried that down the years… People of all races, religions… could be happy together… and enjoy the food and, as you say, the white sauce… a home recipe…

Cape Town was like a village in those days… I was very lucky [finding the Newlands premises], there were five schools there… The rugby stadium, cricket…

They came and approached me for franchises… It started spreading…

I thought that if I adopted the native American Indian… it would be a signal to people of colour that they were welcome at Spur… Today, some people say it’s not quite right… I think it is a mistake [to change the branding].

[The salad valley disappeared] because it cost too much… and a lot of people took advantage…Allen Ambor, founder – Spur Steak Ranch

Here’s an extract from a recent review of Alan Ambor’s autobiography, A taste for life ….

“As a young man, luck came my way and I grabbed it with both hands,” says the founder of Spur.

Allen Ambor avoids the tedium of so many self-indulgent business books by writing an absorbing biography that gives some useful insights into entrepreneurship without the boredom of income statements, spreadsheets or annual reports.

Indeed, it is well into this book that one reaches the founding of the first Spur restaurant in Newlands in Cape Town, long before this steakhouse vision evolved into an extensive, multi-branded, listed franchise.

In the late 1960s, when Ambor’s dream came to fruition, there was something glamorous and magnetic for South Africans about a Wild West-themed steakhouse restaurant and having been a waiter in one such establishment in Joburg, this dynamic young entrepreneur set off to bring the concept to Cape Town in the guise of the Golden Spur Steak Ranch. The first of many Spurs.

What is fascinating, and instructive, is how many obstacles and individuals nearly thwarted the development of Spur — from the Joburg franchising investors who initially supported Ambor’s first venture, but then failed to deliver much-needed support, to the way in which his relationship with Pierre van Tonder, the CEO of the Spur group, turned sour.

What one really must admire is the determination and sheer hard work it took to get that first Newlands Spur up and running, and then to keep at it. At one stage, we read, Ambor’s exhaustion had become so intense that he was about to sell the business….