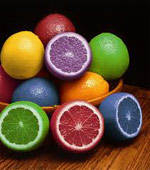 28 Apr 11 The power of culinary colour

In recent years, food colour became controversial because of growing concerns about the potential effect artificial food colourings could have on children’s behaviour. But while strict regulations exist governing synthetic food dyes, the use and manipulation of colour is widespread in meeting and reshaping consumer expectations.

HOW FOOD IS PRESENTED in a shop or arranged on a plate plays a huge role in how we experience it. If you don’t believe that, just watch the next episode of MasterChef. But it’s not just when we are fine-dining that we feast with our eyes.

The colours we associate with and expect of the food and drink we buy have become a critical commercial consideration for pretty much any product you can imagine – from orange juice and pink salmon, to the purple potatoes and black garlic that are now finding their way into our kitchens.

“Many foods are coloured as a matter of course simply to stand out or meet the specific expectations of consumers that they should look a particular way,” says Charles Spence, professor of experimental psychology at Oxford University, who has worked with numerous food and drink companies and with Heston Blumenthal on the commercial and culinary potential of colour.

“Blue, for example, is now associated by many younger consumers with the flavour of raspberries,” he adds. “Red, meanwhile, is a powerful cue to drive consumer perceptions of sweetness – research has shown you can cut sugar content by as much as 10 per cent but red colour cues can make the consumer think that product is still as sweet.”

The colour of food has always been important. It can signify the ripeness of some fruits and the poison contained in others, or the freshness of meat. And colour will naturally vary – by season, or according to exposure to sunlight, temperature or humidity change, and the effects of processing.

Food colour has also long been closely associated with social and cultural factors, including fashion. The origins of the carrot, for example, have been traced back centuries to Iran and Afghanistan where purple, red, white and yellow varieties evolved. The more familiar orange variety became popular in Europe only in the 17th century when it was cultivated as an emblem of the House of Orange and the struggle for Dutch independence.

In recent years, food colour became controversial because of growing concerns about the potential effect artificial food colourings could have on children’s behaviour. But while strict regulations exist governing synthetic food dyes, the use and manipulation of colour is widespread in meeting and reshaping consumer expectations.

“There are now so many tricks to ensure things look natural, one could wonder if ‘natural’ actually exists any more,” says Professor Spence. Take that salmon steak you’re having for supper later. If it’s farmed, the chances are the intensity of its colour has been modified by adjusting the make-up of the food it was fed. Those glacé cherries? Typically, these turn beige during processing, which is why most are dyed red to restore their colour after preserving.

As much effort also goes into to ensuring other products, such as yoghurt, are dazzling white.

“Colour is really, really important in food products because customers tell us if something looks colourful, they think it’s healthy and nutritious and so good for them – cues we are now working to strengthen across a wide range of our products,” says Susi Richards, head of product development at Sainsbury’s. The supermarket recently began selling the Purple Majesty purple potato alongside red oranges and yellow raspberries, and it will introduce a candy-striped beetroot later this year.

“It’s all about using naturally occurring colours to stand out, nothing artificial,” she adds, citing a recent decision to introduce black nanjing rice into own-label mixed salads. “We do add natural colours to some products – strawberry yoghurt, for example – because when we do tastings, it’s clear with some foods, especially those white in colour, consumers find it harder to identify the flavour without colour as a cue.”

The cues that different colours provide are varied, according to Vicky Bullen, the chief executive of the brand design agency Coley Porter Bell. “Colour can be used to demonstrate natural provenance,” she says, “Green, for example, is closely associated with something unprocessed, healthy or organic. Or geographical origin – red and black for Chinese.”

Then there are cultural associations. Purple was once a very expensive colour to produce and still signifies premium and indulgence. And bright, bold colours are used in energy-boosting drinks, for example, because there is a consumer desire for the colour of their drink to match their positive mindset.

Bullen is talking mainly from a packaging perspective, but similar principles can be applied to many foods. As well as standing for indulgence, purple has also come to be associated with good health thanks to produce high in antioxidants, such as blueberries. This ia a link that Albert Bartlett, the potato grower behind the Purple Majesty, is capitalising on……