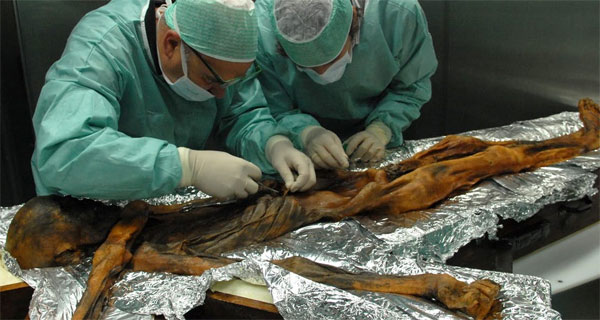 Many years on from his discovery, scientists have now inveiled what a Copper Age mummified man had for his last meal….[Tim Noakes would approve!]

IN 1991, a pair of German tourists stumbled onto the remarkably well-preserved corpse of a man, frozen in the ice of the Eastern Italian Alps. The body turned out to be 5,300 years old, and Ötzi – as he’s since come to be known – has taught us a lot about the Copper Age world he came from, including men’s fashion of the time.

The newest lesson comes from an analysis of his stomach contents, indicating an unexpectedly high-fat diet of meat interspersed with cereals and strangely, toxic bracken.

If you’re wondering how it took more than 25 years for scientists to think to investigate Ötzi’s stomach contents, that’s apparently because nobody could really figure out where his stomach was, since it would have moved during the mummification process.

It wasn’t until CT scans were more closely examined in 2009 that the organ was finally spotted.

Now researchers from the University of Technology Sydney (UTS) and the Eurac Research Institute for Mummy Studies have peered inside to see what Ötzi’s last meal was made up of. The team carefully removed the material and analyzed it, to figure out what a typical Chalcolithic Diet might have included.

According to the study, just prior to his death Ötzi had chowed down on muscle fibres and fat tissue from various animals, with a side of einkorn wheat and other plant matter. The meat was apparently eaten fresh or might have been dried out. 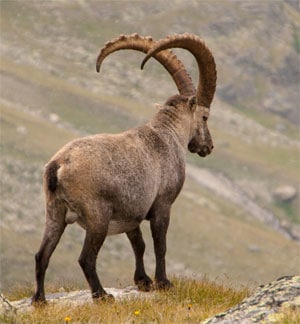 “By using a complementary multi-omics approach combined with microscopy, we reconstructed the Iceman’s last meal, showing that he has had a remarkably high proportion of fat in his diet, supplemented with wild meat from ibex (left) and red deer, cereals from einkorn, and with traces of toxic bracken,” says Frank Maixner, an author of the study.

“The stomach material was, compared to previously analyzed lower intestine samples, extraordinarily well preserved, and it also contained large amounts of unique biomolecules such as lipids, which opened new methodological opportunities to address our questions about Ötzi’s diet.”

Interestingly adipose fat, most likely from the ibex, made up about half of the stomach contents. The team says this amount was unexpected, but it makes sense given he was living in such a hostile climate.

“The high and cold environment is particularly challenging for the human physiology and requires optimal nutrient supply to avoid rapid starvation and energy loss,” says Albert Zink, an author of the study. “The Iceman seemed to have been fully aware that fat represents an excellent energy source.”

The bracken is more of a mystery though, given it’s toxic. The team suggests that Ötzi may have been self-medicating some kind of health problem, which could be related to the parasites that have previously been found in his intestines. There’s also a chance he didn’t eat it but merely wrapped his food in the leaves without realizing it was toxic.

The researchers say their study also revealed traces of the Iceman’s gut bacteria, and reconstructing his long-lost microbiome is the next phase of the study. There’s no doubt we haven’t heard the last from Ötzi.

The research was published in the journal Current Biology.